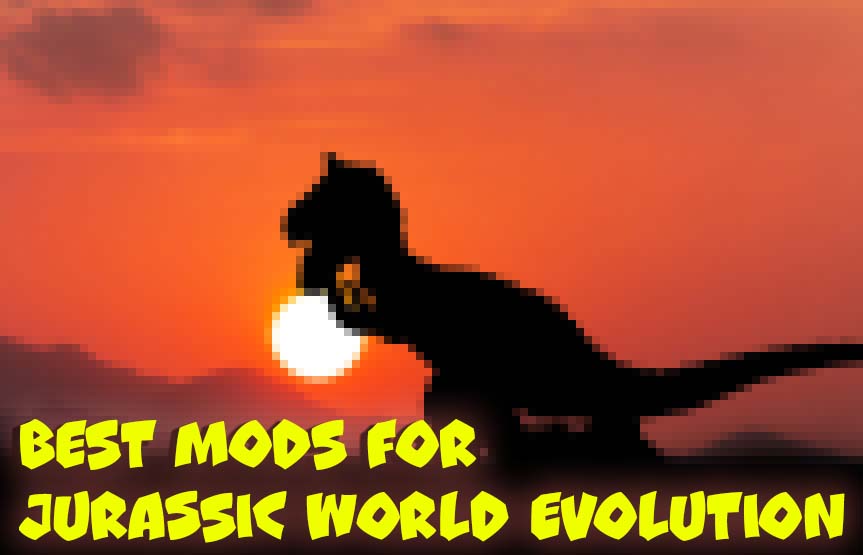 Are you looking for the best Jurassic World Evolution mods available for download now? Well, then, you’ve come to the right place.

Jurassic World Evolution (JWE) is a popular 2018 management and simulation video game. You can construct your theme parks with dinosaurs, research facilities, and more.

It’s a very cool game, but you might have already done everything you can with the main game. Finding some interesting Jurassic World Evolution mods can spice things up if this is the case.

Read on to learn about the best Jurassic Park mods that you can find. Installing some of these mods will improve the experience.

You’ll also learn where to go to get mods and a bit about installing mods.

Love riding around on dinosaurs? Then have a look at the guide on cross-play in Ark Survival.

This is the Jurassic Park mod that’s meant for fans of the original films. If you’re keenly interested in the first three Jurassic Park movies, then this mod should be the one you download first.

It’s a skin and texture mod that makes everything in the game look like the original movies. The dinosaurs and various objects will look more like they did in the older movies instead of the modern movies that star Chris Pratt.

Please understand that this mod differs from the official Return to Jurassic Park DLC. This mod can act as a complement to that piece of DLC, but you can use the mod without owning it, too.

Overall, this is a neat mod that makes sense for those who grew up with the Jurassic Park films. If you love this game and need something to try to make it fresh, it’s worth checking out.

Check out the Jurassic Park Expansion Pack at Nexus Mods.

When starting up a game, it’s possible that you might not like the terrain that you’ve been given to build on. In the standard game, you have the tools to modify the terrain to an extent.

The Enhanced Terrain Tools mod improves upon that by giving you better tools to do the job. You’ll have better tools and greater control over terrain modification than before.

The mod itself swaps the standard terrain tools with the tools that are available in the video game Planet Coaster.

These more advanced tools allow you to flatten the environment, manipulate hills, create valleys, smooth things out, and much more. If you want to have fine control over the terrain, then you need this mod. You’ll be able to make the park of your dreams.

You’ll want to look into installing the Expanded Islands mod. It gives you more space to work with so that you can build up your parks more than before.

The landmass in the game will be substantially bigger, making it so that you can do more with your parks to stretch things out.

If you’ve ever felt that the standard game was restrictive, this is the mod for you.

It should be noted that you’ll need to start a new save game to be able to make use of this mod. The mod could break existing games, and this might make it so that you’ll have to wipe everything and reinstall the game.

It’s not that big of a deal, but remember to start a new park with this mod installed. You’ll have fun seeing how big you can make things now that you have more land to work with.

The Environment Rework mod makes the textures in the game look a lot better. For example, rock formations look much better since this mod allows each rock to be its entity.

It’s now possible to do things such as build caves. You can also make fallen trees and logs using this mod.

This is a great mod to download if you want to make your park look prettier. It’s one of the best Jurassic World mods because it improves the experience.

This doesn’t detract from the base game in any way. It simply adds polish to the textures that didn’t exist before.

I hope you found these mods useful. If you’re unsure how to install mods, check the FAQ below.

Also, check out the guide to the best No Man’s Sky Mods.

Here are the answers to some frequently asked questions about JWE mods:

How Do You Install Mods?

You might be new to the world of installing mods in video games. This is possible on PC games, but you need to know where to go to get mods.

Some titles allow you to install mods due to having Steam Workshop integration easily, but this title doesn’t have that. You’ll need to download mods from websites like Nexusmods.com to get what you’re looking for.

Download the mods and then place the files inside the game folder. To know exactly where each file is supposed to go, it will be necessary to read the instructions with each game mode. Every mod you download should have detailed instructions on the mod page telling you what to do.

Don’t be intimidated by the process of installing mods outside of Steam Workshop. It isn’t that hard to do and can add quite a bit to your game experience. You’ll also be interested to see the creative mods people make for this game and many others.