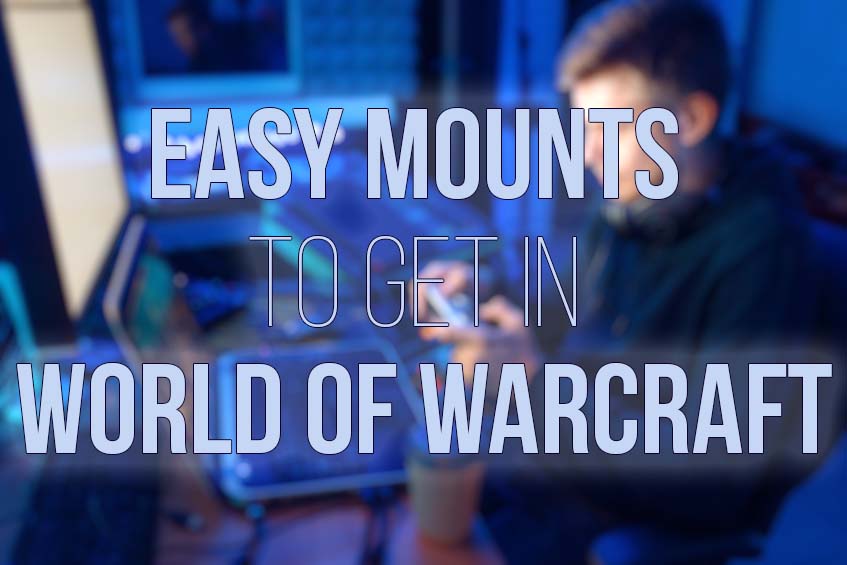 For many, playing World of Warcraft is the perfect way to unwind after a hard day. You log on and play for a while with some of your friends.

Those new to the game might be jealous of their friends’ mounts.

You’d like a cool mount that you can use in the game, wouldn’t you? I know you do!

So I’ve created this guide on easy mounts to get in WoW – whether you prefer to play solo or with friends.

This will ensure a few good mount options while playing the game.

You don’t need to be an expert to be able to acquire these mounts, either. Once you’ve read all the information, you’ll be ready to go out and finally get yourself the mount you deserve.

Check out the best mouse for serious MMORPG players.

Getting the Sandstone Drake will be interesting because it’s not the same as the other mounts I’ll mention in this article.

You don’t ride this mount because you will be transforming into it. Because of this, some people might not even consider the Sandstone Drake to be a mount. It just depends on how you look at it.

It’s easy to get this mount the normal way because you learn it as an alchemy recipe.

For those who want to get this mount even faster, there’s another method that you can follow. You can go to the auction house and purchase the “Vial of Sand” for a measly 60,000 gold. It allows you to skip a bunch of steps to start using the Sandstone Drake immediately.

Overall, this is one of the most useful mounts you should try to get as soon as possible.

The Smoldering Ember Wyrm is sometimes referred to as Nightbane. It used to be a bit of a special secret, but it’s very easy to obtain this mount now.

To get it, you’re going to need to go into Karazhan. Specifically, it would be best if you went to the Legion dungeon.

You’ll see a message pop up in the chat when you’re inside the dungeon. That message will read, “the strange chill of a dark presence winds through the air.”

Reading this message starts a timer that requires you to find five crystals in just five minutes. Every crystal you grab will reset the timer to five minutes, though, and that’s why it’s easy to get Nightbane.

Level 60 players will have a very easy time getting the crystals. You’ll be able to breeze through the dungeon and get everything you need.

If you need help, there are guides online that will lead you to the exact location of the crystals so that you can do things fast.

You shouldn’t need the help since it’s an easy enough task.

After gathering the crystals, you will need to have a showdown with Nightbane. Defeating him gives you a 20% chance to have the Smoldering Ember Wyrm mount drop for your character.

It isn’t guaranteed to get the mount, but you can always try again if it doesn’t drop. You’ll find that 20% is a very good chance, and it shouldn’t take more than four or five tries to get the mount.

See the buyers’ guide to affordable laptops for gaming under 800 USD.

Perhaps you’d like to pretend that you’re Son Goku while playing World of Warcraft with your friends. Getting the Red Flying Cloud mount will allow you to do just that.

It’s very simple to get this mount, and you’ll enjoy having it for your player. To get the cloud, you must first reach exalted status with the Lorewalkers.

This is easy to do since you can grind to gain the necessary reputation. Flying around and grabbing scrolls that you can turn in and give to Lorewalker Cho will be fast.

After you’ve gained exalted status, you’ll be able to purchase the Red Flying Cloud mount for just 600 gold. Go to the Vale of Eternal Blossoms and talk to Tan Shin Tiao to get what you’re after.

Many people say that this is their favorite mount. It has become a classic and recognizable mount. Don’t hesitate to go after this one if you need a mount that is easy to obtain. It’ll serve you well, and it won’t take much time to get it.

Would you like to own one of the funniest mounts you can obtain in WoW? Of course, you would.

The Arboreal Gulper is currently one of the most used mounts in the game. It’s possibly the easiest mount to obtain in the game that is still considered cool.

You can get the Arboreal Gulper as a 100% drop from a rare mob. The rare mob that you need to track down is located in the Ardenweald.

If you’ve spent much time in the Ardenweald, you probably already have what you need.

Once you have this mushroom, you can spawn a rare boss named Humon’gozz. This boss has a lot of HP and will likely be easier to take down if you bring a few friends.

This boss will drop the Arboreal Gulper mount, and you can start using it.

Getting this mount is easier than most of the mounts mentioned.

The Grand Expedition Yak is something that you can buy for 120,000 gold. Even a new player will be able to get the necessary gold after dedicating just a bit of time to grinding.

Players who have been playing the game for a while should have the 120,000 gold ready.

You must travel to Kun-Lai Summit in the Mists of Pandaria to get this mount. From there, you’ll need to go to the village known as One Keg.

In the east, you’ll be able to find Uncle Bigpocket at the Grummle Bazaar, who will sell you the mount. No need to go on an epic quest or hunt down a monster to obtain this mount as a drop.

If you’re looking for something simple, this is the mount for you. It’s very useful despite being so easy to obtain.

It has a transmog vendor and a regular vendor strapped to its saddle. It makes it easy to clear out your bags or change your look on the fly.

Into old-school RPG? Check out this guide to Herbs in OSRS.

The Shimmermist Runner is such a cool mount. This mount was added with the Shadowlands, and many people consider it a top-tier mount.

One of the best things is that you’ll be able to get this mount in about five minutes. You have to travel to the Ardenweald to go to an area called the Root-Home.

From there, you have to go through the Tirna Scithe maze. You’ll need to take a specific route to reach a rare mount that will stand between you and the Shimmerist Runner mount to get the mount.

Dispose of the mob, and you’ll be able to claim your special horse. Getting it isn’t going to be that hard at all, and there are so many videos online about the path you need to take in the maze.

You’ll likely find this mount to be one of your most used. It’s a great mount that looks fantastic and is also very practical. Getting such a good mount without too much effort is great. You’ll love this one, and it comes highly recommended.

Perhaps you’re not that interested in riding on a horse. Maybe riding on an awesome dragon is more your speed.

The Bronze Drake will be right up your alley. This classic World of Warcraft mount has stood the test of time.

Luckily, this is another mount that can be obtained in a short amount of time. You should be able to procure the Bronze Drake in under fifteen minutes.

Start off by going to The Culling of Stratholme and then into the Caverns of Time dungeon. Complete this dungeon by following the markers on your map before the time expires.

This is one of the oldest World of Warcraft dungeons, making it so easy to finish.

Once you reach the end of the dungeon, you’ll be able to face off against a being known as the Infinite Corruptor.

You might think it would be an intimidating fight with such a name, but that isn’t the case. Most people can kill this enemy in just one shot nowadays.

Loot the enemy to claim the Reins of the Bronze Drake. You’ll now be able to fly around on an awesome dragon to get where you need to go.

Granted, this is an older dragon mount that isn’t as flashy as some modern dragon mounts you can obtain. Even so, I still consider the Bronze Drake the coolest dragon because it has a timeless design.

Perhaps riding an intimidating bug would be appealing to you. The Spinemaw Gladechewer is another mount found in the Shadowlands section of the Ardenweald.

It’s an easy mount to obtain since it’s a guaranteed drop. You’ll have to face off with one of the elites in the area.

To get the mount you need to go to the Mistveil Tangle to track down a rare spawn. You have to defeat Bristlecone Terrors when the guardians have been thrown off their backs. This is what creates the chance for the rare spawn to occur.

Gormtamer Tizo is the spawn that you’re looking for. Defeat him!

A carapid mount named Chompy might show up and can then be killed. This enemy will always drop the Spinemaw Gladechewer mount for you.

This does take a bit more work than some of the easier mounts mentioned here, but it’s still not hard to add this mount to your collection.

Check out how to uninstall Blizzard games from Battle.net.

Sinrunner Blanchy is another Shadowlands mount that you’re likely going to want. It’s a good mount that players can get before they reach level 45.

So if you’re still new to the game, it’s good to know that you can get this mount before too long. You need to be able to survive in the Shadowlands to grab this mount.

To get this mount, you need to be nice to it for six days! It’s an undead horse that you need to feed different things. Each day, the horse will ask for something different to eat. Give the horse what it requests, and it’ll eventually become yours.

Since you have to feed the mount six days in a row, this one isn’t necessarily fast to get. However, it’s easy because all you’re doing is feeding the horse.

Once you feed it the last thing it asks for, you’ll be given the mount. It looks amazing and is a lot of fun to ride.

There are so many great mounts that you can obtain in World of Warcraft. Above, you have information about how to obtain some of the coolest mounts.

These mounts all happen to be pretty easy to get. You only have to work to get a few of them; even then, it’s not that difficult.

Enjoy these mounts and have fun adventuring in WoW. Having good mounts to choose from will make your time with the game that much more enjoyable.

You might want to track down all these mounts or only want certain ones. Either way, you know what to do now.