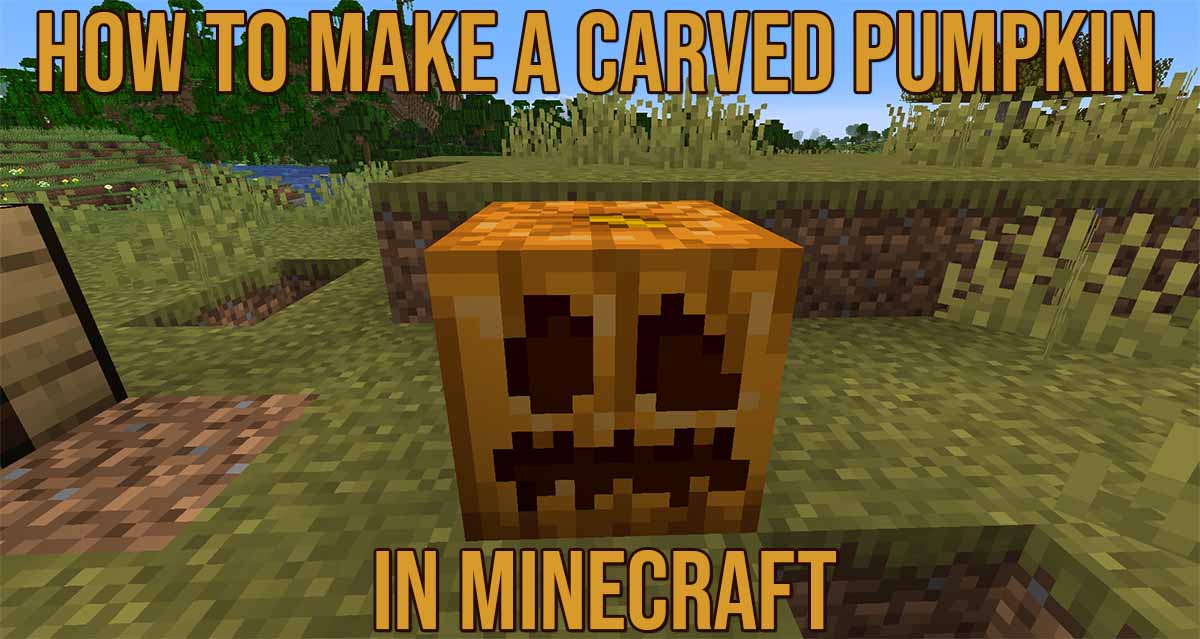 In this step-by-step guide, I’ll show you how to make a carved pumpkin in Minecraft.

Carved pumpkins are useful for a variety of things. Perhaps you want a table jack o’lantern for your home to give it that perfect Halloween look.

Or maybe you want a golem to protect your home or village farms from hostile mobs?

In this quick Minecraft tutorial, I’ll walk you through how to get pumpkin seeds, create a pumpkin farm, grow normal pumpkins, create the tools needed to carve a pumpkin, and how to use carved pumpkins.

You’ll have your entire home decorated with carved face pumpkins and protected by iron golems before you know it. Then you sit inside enjoying your sweet apple pie.

It isn’t hard to do, as long as you follow the step instructions below.

A pumpkin is a fruit block that can be used as a decoration block when carved, worn by yourself (or mobs in the Java Edition version of Minecraft), and used to spawn golems.

There’s are five ways you can get your own pumpkin in Minecraft. Let’s have a quick look at each.

1. Find pumpkins in the wild

Natural pumpkins spawn in grassy biomes on a grass block (fx in plains biomes), which is the most common place to come across them.

Pumpkins are also generated in rail rooms in woodland mansions, as well as in woolen tents in pillager outposts where they make the head of scarecrows.

You can also find pumpkins in taiga and snowy taiga biomes. Fx they spawn in snowy taiga villages instead of hay bales.

When you come across pumpkins in the wild, using any tool to break them will drop a pumpkin.

However, an ax is the fastest way to harvest a pumpkin.

2. Grow your own Minecraft Pumpkins

Finding wild pumpkins isn’t the only way to go. You grow your own pumpkins using pumpkin seeds.

You can get seeds in two ways.

The first is to place a pumpkin in a crafting grid, like so:

Doing so gives you four pumpkin seeds you can then use to grow your own pumpkins.

The second is to find some seeds in minecarts with chests inside mineshafts or in chests in dungeons.

I find the first option to be the quickest, but if you’re exploring some mineshafts or dungeons anyway, do some chest looting. You might come across some seeds.

Creating pumpkin farms is the most efficient way of getting a lot of pumpkins fast.

Once you have what you need, it’ll be time to prepare some land for farming.

Start by tilling the land using a hoe, and ensure that you have at least two block rows tilled.

When this is done, plant the seeds.

Notice, that a pumpkin plant doesn’t grow directly in the spot where you place the seed.

Instead, it grows in the adjacent grass block, which means you need space next to your pumpkins to grow them.

A new pumpkin can grow on empty blocks of grass, podzol, coarse dirt, dirt, and farmland.

Make sure that you have some type of water source nearby. You can make a pond or have a simple trough of water near the farm area. Hydrate the farmland and keep it from deteriorating.

Pumpkins also need a light source to grow. So place torches (or more powerful light sources such as lanterns) near the pumpkin patch to ensure that the pumpkins have enough light to grow.

I went a bit overboard here. You don’t need that many torches for the pumpkins to grow. But I thought it looked cool as a flaming fence.

Make sure to use normal torches and not redstone torches, as the latter doesn’t give enough light. If the light level is too low, it will cause the pumpkin seeds to pop out of the ground again.

After doing this, you’ll have to wait for the pumpkins to grow so that you can harvest them.

How make the pumpkins grow faster in Minecraft

A pumpkin stem will take between 10 and 30 minutes to grow.

You can make things go faster by using bonemeal as a fertilizer to grow the stems faster.

If you want to grow pumpkins as fast as possible, you should at least prepare a plot of hydrated farmland with four adjacent open spaces.

Having all four adjacent blocks open makes the process go a lot faster. You now know how to farm pumpkins successfully.

3. Buy a pumpkin from a wandering trader

You can also loot some chests in villages or ruins. You might be lucky to find some pumpkins in there.

5. Kill a mob wearing a pumpkin (Java Ed. only)

This option is only available in Minecraft Java Edition, and only during the spooky season on October 31st. And you need to use a tool enchanted with Looting.

Even so, there’s a maximum of 3 percent chance (depending on the enchanted looting level) that the carved pumpkin head is dropped.

It’s safe to say that this option is only for the most hardcore Minecraft players.

How to make a carved pumpkin in Minecraft

Once you find some pumpkins, you can create a carved version of a pumpkin so long as you have pair of shears.

Use the shears on an uncarved pumpkin that is placed on the ground by using the button you would normally use for placing or interacting (fx right-click on PC).

Congratulations, now you’ve created a pumpkin with a spooky face in Minecraft.

Crafting a pair of shears is pretty easy.

You simply need to place two iron ingots in the crafting grid on your crafting table.

Once you’ve carved as many pumpkins as you want, you’ll have to collect them. Grab the pumpkins and add them to your inventory.

The pumpkins can now be used to make jack o’lanterns, iron golems, and snow golems. You can also use pumpkins to cultivate chicken farms.

It’s also worth noting that every pumpkin that you carve will give you pumpkin seeds.

This means that you’ll have more pumpkin seeds that you can use to keep growing pumpkins.

You can keep the cycle going so that you won’t run out of pumpkins.

Growing them is really easy, so making some pumpkin patches near your home is recommended.

So what can be done with the carved pumpkins? A lot of things.

Below you can see some basic crafting recipes and fun stuff you can do with carved pumpkins.

How to make a jack o’lantern

You can make jack o’lanterns out of carved pumpkins.

Put a carved pumpkin above a torch on the crafting table, and you’re done.

You can use jack o’lanterns instead of carved pumpkins as the golem head if you choose.

How to make a snow golem

You can use carved pumpkins to create either snow golems or iron golems.

These golems can be used as sentries to protect your home base in the game.

To make a snow golem, you need to place a carved pumpkin on top of two snow blocks.

You can also use a Jack O’lantern:

Even when you use a jack o’lantern it will still look like you’ve placed a regular carved pumpkin. I guess the snow kills the light or something.

You can harvest the carved pumpkin head of a snow golem. Actually, the pumpkin isn’t the head, but a helmet.

To do this, you need to use the shears on the snow golem.

This will make the golem drop its helmet. So now you can see the real face of your snow friend.

How to make an iron golem

Iron golems are made by making a “T-shaped” iron block arrangement.

You then put the carved pumpkin on top of the iron blocks to make the iron golem.

Wear a carved pumpkin on your head as a helmet

You can also wear carved pumpkins on your head! Put a carved pumpkin in the helmet slot of your inventory to show off your new look.

When you wear a pumpkin as a helmet, your field of view of 1st person is limited to the shape of the carvings.

There’s a practical reason to wear a carved pumpkin on your head.

Wearing one allows you to look Endermen in the eye without causing them to aggro, and it makes fighting the Ender Dragon a lot simpler overall.

What About Pumpkin Pie?

Perhaps you’d like your Minecraft character to enjoy some delicious pumpkin pie.

The Minecraft pumpkin pie recipe consists of one normal pumpkin, one sugar, and one egg.

You can make a pumpkin pie with a regular pumpkin, but not with a carved pumpkin.

If your goal is to make pumpkin pie, don’t turn the pumpkin into a carved pumpkin.

It’s a good idea to keep some pumpkins around to carve and others to use for making pumpkin pie.

I hope you found this Minecraft pumpkin tutorial guide useful.

In the past, pumpkins didn’t need to be carved in Minecraft. Pumpkins would simply spawn in the world with faces already on them.

I don’t miss that, as I like the addition of natural pumpkins to Minecraft.