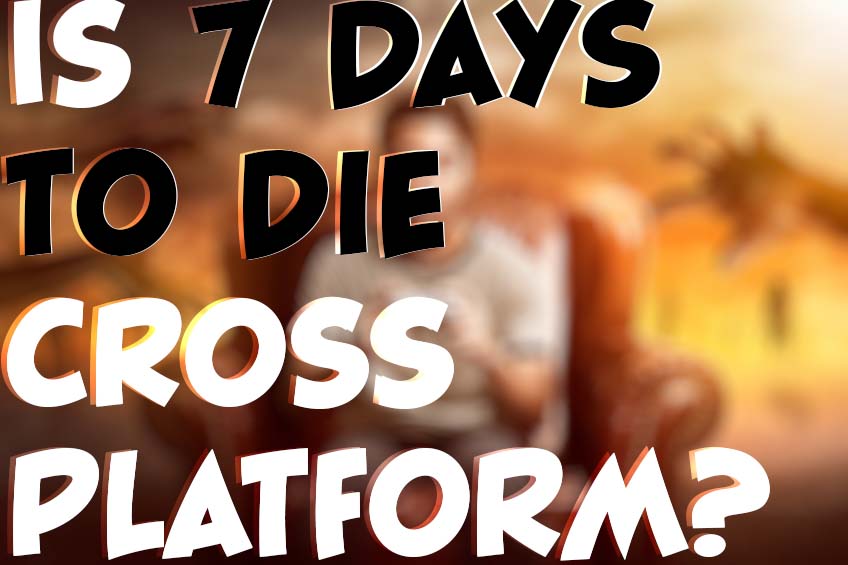 Even though 7 Days to Die is both multiplayer and multiplatform, it’s only somewhat cross-platform.

Confused? Don’t worry! Below, you can see the exact cross-platform systems and those that are not. And I’ll also dive into the problems with the console versions.

So let’s break it down: is 7 Days to Die cross-platform?

Even though 7 Days to Die is both multiplatform and multiplayer, it’s not truly cross-platform. 7 Days to Die supports crossplay between PC (Windows), Mac (macOS), and Linux. But it doesn’t support cross-play between PC/Mac/Linux and consoles and not between Xbox or PS4.

Into survival horror games? Check out Is The Forest cross platform?

The reason why 7 Days to Die isn’t cross-platform in 2022 between PC and consoles.

It was the plan from the outset that 7 Days to Die should have been cross-platform between and support cross-play PS4 and Xbox.

And rumors (or hope) online have speculated that it would also be cross-platform between PC and consoles – probably sparked by the fact that it pops up as a cross-platform game on Steam.

But unfortunate financial events with the publisher Telltale Publishing (see below) and the fact that the PC/Mac/Linux versions vary significantly from the console versions have made cross-play impossible.

Why haven’t the console versions been updated?

The console versions of 7 Days to Die have not been updated in a while, and many players have wondered why.

The developer Fun Pimps is a PC developer first. So they licensed the game to the publisher Telltale Publishing, who, in turn, hired the developer Iron Galaxy to port the PC game to the console.

However, Telltale Publishing ran into financial problems in late 2018.

The developer Fun Pimps re-acquired the publishing rights to the console version of the game late in 2019. But porting a game from PC to consoles is very expensive due to a strict testing and submission process.

So it’s still unclear if any updates will ever come to the console version (Source).

Here are the answers to some frequently asked questions.

Is 7 Days to Die split-screen?

You can play the PS4 version of 7 Days to Die as a split-screen multiplayer game from your couch. Both cooperative and hostile servers are available.

Like the PS4 version, however, you can play the Xbox version of the game as a split-screen multiplayer game with friends (or foes).

7 Days to Die is a survival horror game that was initially released on December 13, 2013, by developer and publisher The Fun Pimps in early access on Steam.

It’s set in an open-world environment and features crafting as a big part of the gameplay.

Since its initial release as an early-access game, it has garnered much popularity and notoriety. In 2016, the game was released for the Playstation 4 and Xbox One.

However, the console versions ran into problems, which I’ll get back to in a minute.

In 7 Days to Die, a third world war caused the world as humanity knew it to end. After a nuclear apocalypse, a large chunk of the world was destroyed, and many were turned into mindless zombies.

Players are trying to survive in this world and are placed in the fictional area of Navezgane, Arizona.

7 Days to Die takes aspects of many different games to create a unique player experience. The game’s objective is to survive in a post-apocalyptic world for as long as possible.

In this survival horror game, you’ll be facing off against zombie hordes, but you’ll also have to worry about gathering food and water to aid your survival.

This game has substantial crafting elements, meaning gathering materials to craft things that will help you survive, which is a big part of the gameplay loop.

Players are spawned into either a randomly generated world or one preset world set in Navezgane, Arizona. Aside from fighting zombies to survive, players will also be allowed to hunt animals for food.

Multiplayer options have kept this game popular for quite some time. There are different online servers where you can play the game cooperatively with friends or encounter hostile players that you will have to overcome.

What platforms are 7 Days to Die available for?

7 Days to Die is available for:

You can also play 7 Days to Die on PS5, but the graphics are the same.