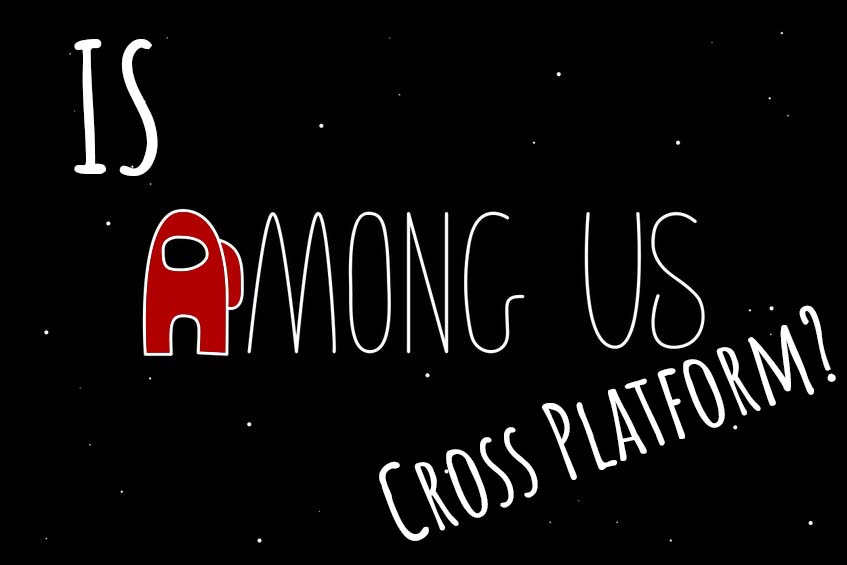 Do you want to play ‘Amogus’ with your imposter friends on other platforms? And are you wondering: is Among Us cross-platform?

In this article, I’ll go into more detail about this and also answer questions about:

Let’s break it down.

The short answer is yes, Among Us is cross platform. That means the game supports cross-play even if you’re on a PC and your friends are on Nintendo Switch, Android, and iPhone devices. However, each player needs to be located in the same server region. So, you can’t play with friends in Europe if you’re based in the US without a VPN.

Table 1: Among Us cross-platform support for easy comparison

If you enjoy this game, check out my guide to the best similar games like Among Us.

How to set up an Among Us cross-play session in 3 easy steps:

Now friends can join your game by simply clicking Enter Code from the main menu, and typing in the code, you send them.

What’s the difference between the mobile versions of Among Us and the PC and console versions?

There are only minor differences Among Us on PC, console, Android, or iOS.

The biggest difference is probably the price. The game is free to play on smartphones for the version with ads. But you can also purchase an ad-free version for a small amount.

But on Steam, Epic Games, and Itch.io, you have to pay a small amount for the main game.

DLCs (like skins) cost a little bit extra on all platforms.

There’re also minor differences in the user interface because you can use the mouse on a PC and an on-screen joypad on smartphones.

Bu the way, Among Us is one of those rare games where using a mouse isn’t necessarily an advantage.

Does Among Us support cross-progression?

No, Among Us doesn’t support cross-progression saves. You can’t transfer any purchased DLCs (such as skins) to another platform.

However, you can transfer your ad-free purchase to a new smartphone or transfer it to an iPad if you have purchased it for iPhone.

Did you know you can share your Steam library with family and friends?

Can I play Among Us on Mac?

Yes, but not natively because Among Us isn’t supported by Mac. So you’ll have to use an Android emulator like BlueStacks.

What is Among Us ? – A quick overview.

Among Us is a multiplayer game that is all about social deduction. It was originally released on June 15, 2018, for mobile devices, and it came to Windows PC in November of that year.

Despite releasing in 2018, the game didn’t become popular until years later, in 2020, when Twitch streamers started playing the game regularly.

The resurgence in the popularity of this title led to it being released on popular video game consoles. You can now purchase Among Us on Playstation 4, Playstation 5, Xbox One, Xbox Series consoles, and Nintendo Switch.

In Among Us, you’re going to create your own stories, but the game takes place in a space-themed setting. You’re given tasks you need to perform, but the catch is that there are impostors among you.

In the best ‘whodunnit’ style, you have to figure out who you can trust and who you cannot before it’s too late.

This is a very social experience that is meant to be played with others, and there isn’t a deep story or lore that you need to dive into to enjoy this title.

The game is played by joining online servers with others. You’ll be playing with anywhere between 4 and 15 players.

Up to three players will be chosen to be impostors meant to take down the group of normal players by killing them. Impostors can kill other players, but if they get caught doing so, it’ll be possible for the witnesses to tell the others what they saw.

When someone witnesses a murder, they can call an emergency meeting. Players will then discuss what happened in real time.

Interestingly, players can try to deceive each other over voice chat to get them to think that they’re not impostors.

The group can vote on who to throw out of the airlock into space, and sometimes the wrong choice will be made, which will cause an innocent player to die.

The normal players are supposed to finish arbitrary tasks that will cause them to win the game. It’s possible to win the game by completing the tasks or by sussing out who all of the impostors are.

Impostors will win the game when they kill enough people so that they are equal in number to the normal crew or by keeping the crew from being able to resolve major sabotage.

Check out how to get an invisible name in Among Us to get harder to detect.

What platforms are Among Us available For?

Among Us is available for:

The console versions of Among Us for PS4, PS5, Xbox One, Xbox Series X/S is still to be released.