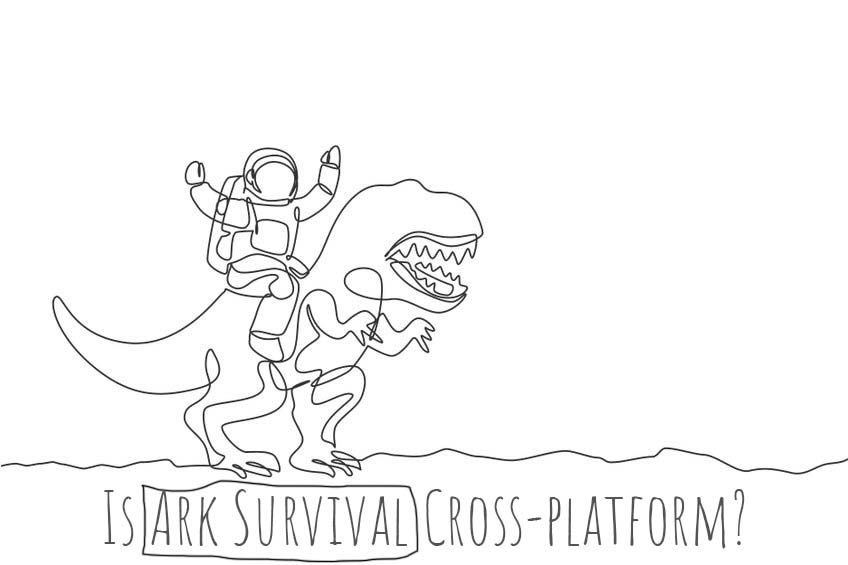 Do you also love taming and riding dinosaurs but feel lonely in the big open world of Ark?

Do you want to sit around the campfire telling tales of battles with other players or fierce prehistoric creatures with your friends? Or flying through deep space on a massive spaceship?

Well, then, ARK: Survival Evolved is the game for you. But – as with most games – it’s most fun when you play it with friends.

But is Ark Survival cross-platform?

If you own a PlayStation 4 or 5, you can only play with others using a PS4 or PS5.

You can cross-play Ark Survival between iOS and Android devices but no other platforms.

You can cross-play Ark Survival between Google Stadia and PC, but the functionality is limited on Stadia.

Into survival games? Check out more on Don’t Starve Together.

Here is some more info on ARK: Survival Evolved. Fx, you can see a list of expansions and more.

What is ARK: Survival Evolved? – Survival of the fittest!

It was an early access game on platforms such as Steam and Microsoft Windows in 2015, but it was released in full on August 20, 2017, for PC, Playstation 4, and Xbox One.

This is an action-adventure game with a focus on survival. You play as a person stranded on a hazardous island filled with dinosaurs and other wild animals.

Many survival games are light on story elements, but Ark has a story for those who want to dig into it.

The lore involves many different science-fiction elements, and much of the story is told through finding explorer notes on the island. You’ll have to go searching to figure out every last bit of what is going on in this game for yourself.

Gameplay in Ark: Survival Evolved can take place from either a first-person or third-person perspective. Players are free to switch perspectives at any time they choose.

This is an action game with survival elements where players are dropped on an island and forced to overcome many dangers.

The island is open-world, meaning you’re free to explore at your leisure, either solo or with friends, through online multiplayer.

Survival in this game involves establishing a base, acquiring weapons, finding resources to aid your survival, and even taming dinosaurs.

You can potentially tame dinosaurs and then ride them into battle.

Most of the creatures in this game are based on real-life dinosaurs and prehistoric creatures, but some mythical creatures make appearances.

Are you scared of ghosts and the dark? Check out more on Phasmophobia!

Since 2016, Studio Wildcard has released five expansions, including new maps, creatures, gameplay elements, and more. You also go from prehistoric landscapes to spaceships flying through space. Or, as the YouTube user Scatty Ork comments for the video below:

They really came a far way, considering they started with weirdly shaped characters throwing poop at each other.

Here is a short description of each DLC.

What platforms is Ark Survival Available For?

Ark Survival is available for: