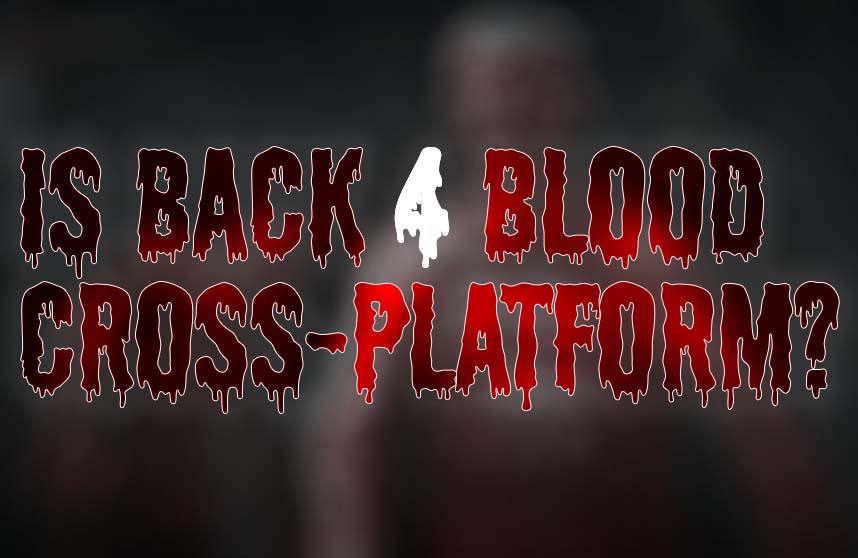 I loved Left 4 Dead (2008) from when the first horde and Tank attacked me. And I’ve played both L4D and L4D2, including many mods and community-created campaigns until this day.

So when I heard that the team behind L4D had a new game coming out, I couldn’t wait to try it out.

And it’s clear from the start that Back 4 Blood is a spiritual successor to the Left 4 Dead franchise, with you playing a character in a four-person team against hordes of zombies.

But many things in gaming have changed since L4D hit the markets in 2008, and gamers expect to see more now is crossplay between the different platforms.

So is Back 4 Blood cross-platform? And what about cross-generation and cross-progression?

Good news, zombie slayers! Back 4 Blood is a true cross-platform and cross-gen game, which means that that you can crossplay B4B with friends on PC, Xbox One/Xbox Series X|S, PS4, and PS5.

For more zombies, check out Is CoD: Cold War Cross-Platform?

Gather your team, and let’s hunt down some zombies for the answer to frequently asked questions about Back 4 Blood below:

Is Back 4 Blood free on Game Pass?

Yes, Back 4 Blood is free on Game Pass Ultimate at the time of writing this.

How do I enable crossplay in Back 4 Blood?

To enable crossplay in B4B follows these simple steps:

Does Back 4 Blood support cross-progression?

Does Back 4 Blood have a split-screen?

No, unfortunately, B4B doesn’t have a split-screen mode. That means there’s no couch co-op available, even on the console.

Can I create a private lobby in Back 4 Blood?

If you don’t want to play with random strangers, you can create a private lobby under the Matchmaking Preferences from the game lobby.

What is Back 4 Blood. – A beginners’ introduction.

Back 4 Blood (aka B4B) is a multiplayer first-person shooter developed by Turtle Rock Studios and published by Warner Bros. Interactive Entertainment.

Back 4 Blood was released on October 12, 2021, and it’s available on many platforms, such as PC, Playstation 4, Playstation 5, Xbox One, and Xbox Series consoles.

The plot of Back 4 Blood is pretty simple, but that doesn’t mean it isn’t fun.

You’ll be fighting zombie-like creatures after a worldwide outbreak occurs. The outbreak happened because humans were exposed to an unusual parasite.

This has caused the majority of humanity to be turned into “Ridden,” and the world is now in a post-apocalyptic state.

You’ll be one of a group of veterans known as the Cleaners. These experts come together to care for the Ridden and help people survive in this world.

Into zombies and cross-platform play? Check out CoD: Vanguard.

For the most part, Back 4 Blood plays the same way very much as Left 4 Dead. The game has distinct feelings, but the game modes in this title are similar to those found in the L4D titles.

You’ll be able to take on levels as one member of a four-person team. Levels can be played online, so you can team up with three friends to take on the Ridden.

There’s also a four-on-four PvP mode that you can play online. You’ll note some differences in this game compared to the past’s Left 4 Dead titles.

For example, this title has cards you can choose at the start of each level that will modify the gameplay in specific ways.

The AI Director can also use cards on the players, and this can make things tougher by spawning more enemies or even creating a fog that makes it tough to see in certain areas.

What platforms are Back 4 Blood available for?

Back 4 Blood is available for:

Check out Is 7 Days To Die Cross-Platform?