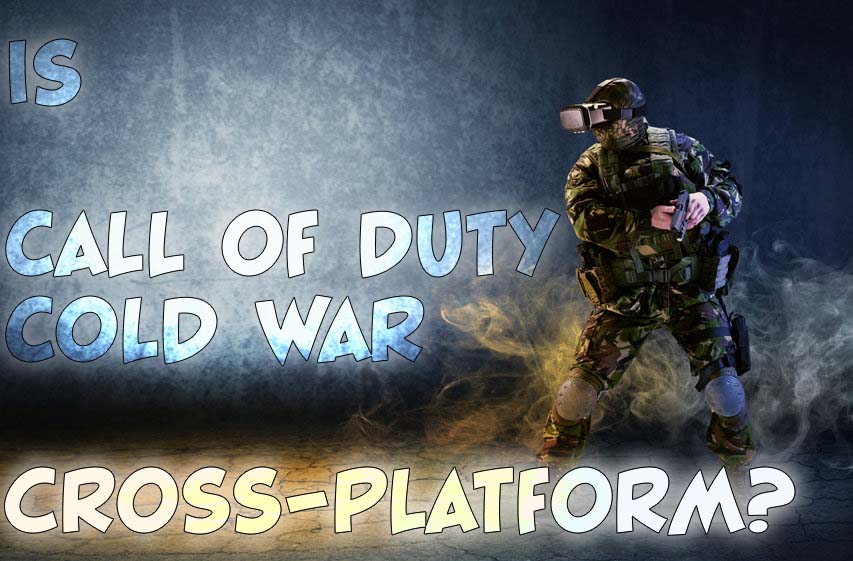 Call of Duty Cold War (aka Call of Duty: Black Ops – Cold War aka CoD Cold War) is a multiplatform first-person shooter. It features a single-player campaign and multiplayer modes and is the sixth installment in the CoD Black Ops series.

The story ties in with the setting in CoD: Warzone, and items you unlock in Cold War are accessible in Warzone and vice versa. Since Season 3, Cold War has had its mini battle-royale mode, multi-team elimination.

It also includes a fun zombies game mode, and I’ve included more about this in the FAQ section below.

So is Call of Duty Cold War cross-platform?

Yes, Call of Duty Cold War is a true cross-platform game. That means that if you’re on PC, you can play with other players on Xbox One or Xbox Series X/S as well as PS4 and PS5. Cold War also supports cross-save across all the platforms, as long as you’re logged in to the same Activision/Call of Duty account. You can even use items you unlock in Cold War in CoD Warzone and vice versa.

To enable cross-play in CoD Cold War, follow these steps:

If crossplay is disabled, you’ll only be able to play with other players on the same platform as yourself.

To find and add your friends on a different platform, navigate to the ‘Friends’ menu.

On the console, you can use these shortcuts to open the ‘Add Activision Friends’ menu quickly:

Then type in your friend’s Activision ID, and press ‘Send Friend Request’.

After they’ve accepted your friend request, your friends will show up under the Friends tab, and you can click on the name and choose Invite to party.

Yes, Call of Duty Cold War is cross-generation. That means you can cross-play with friends on fx Xbox One if you’re on Xbox Series X/S. The same is true if fx you’re on PS5 and they’re on PS4.

If you own a PS5 or Xbox Series X/S, there are two cross-gen modes you can play the game in:

The first is backward compatibility which is essentially the same game as the PS4 or Xbox One version.

The second mode is an enhanced mode where you’ll get higher resolution, better frame rates, faster loading times, and more.

If you’ve purchased a digital PS4 or Xbox One version of CoD Warzone, you can seamlessly upgrade to the PS5, and Xbox Series X/S enhanced versions.

If you’ve purchased a physical copy of the PS4 or Xbox One version, you can do the same – but the disc has to be in the PS5 or Xbox Series X for you to play the updated version. So you can’t play the enhanced digital version and lend the disc to a friend.

However, if you’ve purchased a physical copy for PS5 or Xbox Series X, you can’t use it for PS4 or Xbox One.

Let’s look closely at how you enable cross-play in CoD Cold War. And also a closer look at the CoD zombies’ game mode.

How many players can play together simultaneously in COD Cold War?

Call of Duty Cold War allows up to 150 players to play together simultaneously. In some limited-time game modes, you can play up to 200 players at the same time.

Yes, you can play split-screen in Call of Duty Cold War, although split-screen mode is limited to the game’s console versions.

Another thing is that if you want to play split-screen online, you’ll need two accounts. For local offline play, the second player can sign in as a Guest.

Here are a few facts about split-screen in CoD Cold War:

Yes, CoD Cold War supports cross-progression and cross-save. Everything you unlock in Cold War is automatically saved to your Activision/Call of Duty account and transferred to other platforms.

Everything you unlock in Cold War is accessible in Warzone and vice versa.

However, items you unlock in Cold War can’t be used in Modern Warfare and vice versa.

What is Call of Duty: Cold War? – A brief introduction.

Call of Duty: Black Ops – Cold War is a first-person shooter released in 2020. It was co-developed by the talented teams at Treyarch and Raven Software.

This is the 17th installment in the Call of Duty franchise and the sixth Black Ops game. It also has the distinction of being only the second game in the franchise to have two development teams.

The story in CoD Cold War takes place during the Cold War period of the 1980s. You’ll be playing as black ops specialists as you learn about conflicts that are taking place during the 1980s between the United States and the Soviet Union.

Interestingly, the game features realistic portrayals of President Ronald Reagan during certain story moments. Those who like 1980s action movies will likely enjoy how this story plays out.

Black Ops Cold War is a game that controls very much like you’d expect a Call of Duty game to control. Character movement feels smooth, and shooting is very precise.

You’ll have the option to play through a single-player campaign, and the multiplayer modes you know and love are also back.

Multiplayer in this title focuses more on the classic Call of Duty experience, but players have access to many different interesting weapons and gadgets.

What platforms are Call of Duty: Cold War available for?

Call of Duty: Cold War is available for:

Also, check out if CoD Black Ops 4 is cross-platform.

What Is Call of Duty Black Ops Cold War Zombies?

Call of Duty Black Ops Cold War Zombies is just a game mode. In this mode, you’ll be tasked with surviving zombie hordes, and there are also significant story elements to the zombies’ mode. In this thrilling zombie-fighting game, you’ll be protecting a location and trying to survive alongside friends.

The story of this game isn’t necessarily deep, but it is quite entertaining. You’ll be able to work your way through various scenarios while fighting on different maps.

The story takes place during the cold war period of the 80s, but it winds up tying back to the World War II days. It’s pretty intriguing, but you’ll likely be more focused on surviving since you don’t get too long to breathe between zombie attacks.

So what exactly is a Steam Yellow Name, and how do you get one?

This game plays like a standard Call of Duty game and a first-person shooter. In the normal game, you can shoot and kill zombies with the same precision as enemy soldiers.

You’ll also be able to do things such as board up windows and try to protect certain points. It has a different feel from the normal campaign despite being mechanically identical.

Do you know how to share your Steam games library with family and friends?