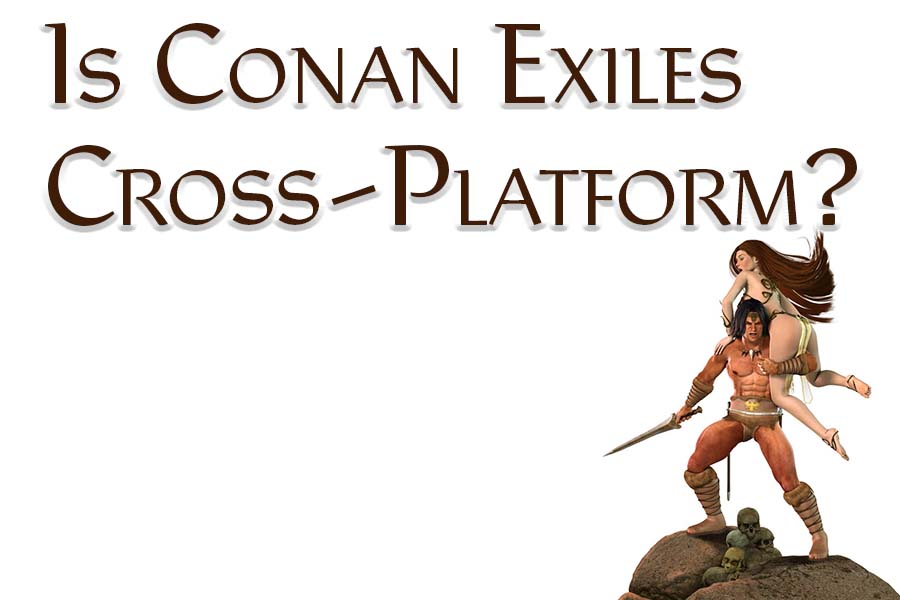 Conan Exiles is an online survival action-adventure you can play as both single-player and multiplayer.

Conan Exiles is also a multiplatform game available for both PC and consoles, so naturally, we want to run around in the game’s sandbox with our friends – au natural (or do we?) – on other platforms.

In other words, is Conan Exiles cross-platform?

Unfortunately, Conan Exiles isn’t cross-platform, meaning you can’t cross-play with friends on either Xbox (One or X/S) or PlayStation (PS4 or PS5) if you’re on a PC running Microsoft Windows and vice versa. However, on PC, there’s crossplay between Microsoft Store and Steam.

Here are the answers to some other frequently asked questions about Conan Exiles. Put a saddle on your favorite Rhino, and let’s dive in.

How many players can play together at the same time in Conan Exiles?

Yes, Conan Exiles supports co-op. When you set up a single-player game, you get the option to launch it as a coop game, in which case, other players can join your game, and you’ll be the host. You can play up to 4 players in total in co-op mode.

Keep in mind that in this game mode, your computer will act as a server and render the game at the same time. Because of this, there’s a tether between you and other players, i.e., you can’t move too far away from each other (the distance is about a square in the map grid).

How to get rid of the tether in Conan Exiles.

The only way to avoid the tether in Conan Exiles is to use a dedicated server. You can either set up a server on a dedicated computer or rent one from G-Portal.

Can you transfer characters between servers in Conan Exiles?

Note there are some important limitations:

The Xbox and PS4 version of Conan Exiles is censored in the US version but not in Europe or Japan. That means you can’t get full nudity – only partial – in the NA version.

That being said, whether or not full nudity is available depends on the server.

To turn on full nudity in Conan Exiles in SP, you must make yourself an admin in the setting menu. Then change the nudity setting to full and click apply.

No, unfortunately, Conan Exiles doesn’t feature a split-screen co-op mode on PC or consoles. So no couch play for PS4 or Xbox this time.

The game is set in the world of Conan the Barbarian, and you’ll be playing as a custom character that you create. Fans of Conan will find a lot to enjoy when playing this game.

The story of Conan Exiles has to do with a character surviving in the fictional world of the prehistoric Hyborian Age of Conan the Barbarian.

The storyline isn’t the game’s main feature, as it focuses on survival gameplay. But that doesn’t mean you can’t find out information about the lore of the Conan universe.

In other words, you’ll be doing a lot of exploring, and you’ll find that the world is rich with references to Conan the Barbarian source material such as Lorestones and books. You’ll have to dig to find things, but you won’t find a traditional story while playing this game.

Since your goal is survival in this game, it will mostly involve you fighting enemies and finding supplies you need to keep on going. It’s a pretty standard action title where you’ll also need to manage things such as hunger and thirst.

Thankfully, there are a lot of neat things that you can do that will make the game fun. For instance, you can catch and raise animals as companions or train them to defend your home.

You can also play on different servers that will put other players into the game. This means you can participate in player-versus-player (PvP) combat if you’re inclined. You’ll also be doing standard things as you do in most survival titles, such as crafting.

Isle of Siptah is a massive expansion to Conan Exiles, released in May 2021.

Conan Exiles: Isle of Siptah features a huge and dangerous new island to explore. The island features 12 new dungeons – called Vaults – to explore and have fun with monster and loot hunting.

At the center of the island is a dark tower that looms above the landscape clouded in a magical Maelstrom storm, which spawns horrible new creatures.

And there’s the opportunity to worship and summon the massive spider god Zath.

What platforms are Conan Exiles available for?

Conan Exiles is available for: