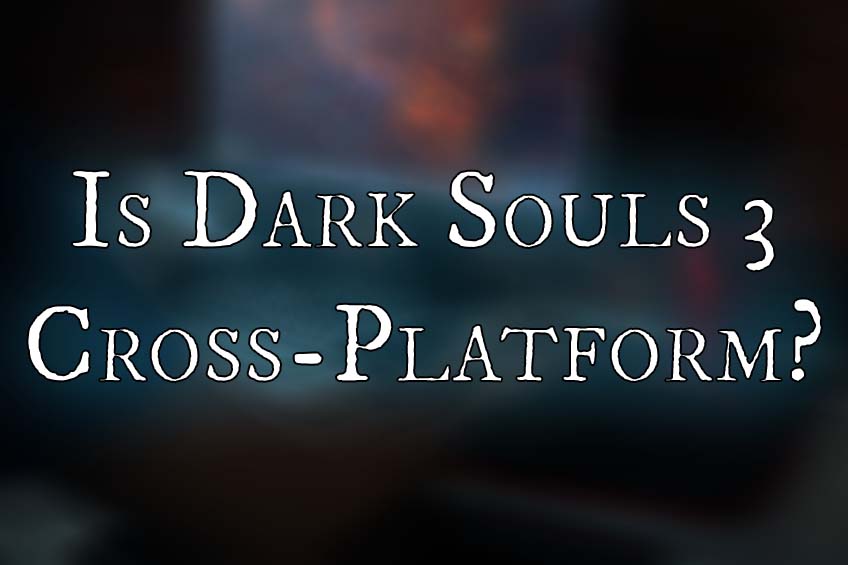 Dark Souls III (aka Dark Souls 3, aka DS3) is a single-player and multiplayer action role-playing game. It is the last game in the Dark Souls trilogy and the fourth installment in the Souls series.

DS3 is available for both PC and consoles. So is Dark Souls 3 cross-platform?

Into live streaming? Check out my guide to Twitch overlays.

Here are the answers to some common questions about Dark Souls 3. Grab your Estus Flask and dive in.

Are you kidding me? Yes, DS3 is hard!

Yes, Dark Souls 3 is both multiplayer and single-player.

Dark Souls 3 is level-based, meaning it isn’t open-world. It would be best if you unlocked all areas of DS3 first to roam freely in it like an open-world game.

Yes, DS3 does have a co-op mode. Up to four players can coop in Dark Souls 3.

The co-op mode is called Summoning, making it possible for another player to join your session. But this being Dark Souls 3, after all, means that it’s not available from the get-go, you have to earn it.

You must buy the White Sign Soapstone from the Shrine Handmaid at the Firelink Shrine for 500 souls. You can now draw a sign on the ground, enabling other players to summon you.

If you don’t want everyone to be able to summon you, you can add a password before drawing the sigh on the ground. You’ll need to share this password with your friend and vice versa.

Note: If you’ve already defeated the boss in a particular area, you can’t summon other players. Also, ensure you’re standing in the same location in the game.

Also note that if you’re too overpowered (or underpowered), you can’t join another co-op session. Check out the Summon Range Calculator to find out.

Coop isn’t possible if your covenant is hostile to the hosts or vice versa.

You don’t need Ember to join other players’ sessions, as you’ll earn it after you’ve helped another player out with clearing an area.

Yes, you can play Dark Souls 3 as PvP. If you place a Red Sign Soapstone (you can find it by killing the worm outside Rosaria’s Bed Chamber in the Cathedral of the Deep), other players can transport you to their world, where you can battle it out.

If you only want to battle friends, you’ll need to set a password in the settings menu.

You can invade a game hosted by another player – and even kill the host. Look for the Cracked Red Eye Orb or the Red Eye Orb by completing the Rosaria’s Fingers covenant Leonard storyline.

Is Dark Souls 3 worth it?

If you’re a bit masochistic and enjoy memorizing moves and dying over and over until you get it right, then yes, Dark Souls 3 is worth it. I don’t mind since I grew up in the 1980s and all games were like this.

However, be aware that the number of players still playing DS3 has dwindled since its initial release, so that you won’t get the same online experience anymore.

What is Dark Souls 3? – A brief beginner’s introduction.

Dark Souls 3 is the third entry in the popular Dark Souls franchise. The Dark Soul games have a reputation for being rather difficult.

DS3 is a role-playing action game where you’ll explore an immersive and dangerous world from a third-person perspective. The game was released in 2016 for PC, Playstation 4, and Xbox One.

The story of Dark Souls 3 is set in the Kingdom of Lothric. You’ll discover that the current Age of the Flame is ending and that the Age of Dark has started. Undead beings and other cursed entities are now roaming the land.

Your task as a player is to restore the First Flame so that you can re-enter the Age of the Flame and stop this chaos from continuing.

Overall, the game’s dark Gothic setting will pull most players in. There is a large world to explore, and you can decide how you want to approach things.

This game has different endings; you could choose to be the hero or embrace the Age of Dark.

Dark Souls games are precise in that you must block, dodge, or parry at the right time to avoid enemy hits.

Learning enemy patterns will be an essential part of playing through the game. The game is designed, so players are meant to die and keep learning how to improve.

When you die (and you will!), you’ll be able to return to the spot where you died to reclaim your lost souls, which are used as experience points.

You get stronger as you continue to make progress in the game. The game might be very hard at first, but it will get easier as you go in some ways.

You aren’t given a direct path in this game either, which means you can choose how to proceed. Two players might approach the game differently, which means that they will likely explore different areas at different times.

After the initial release of Dark Souls III, the developers released two DLCs:

What platforms are Dark Souls 3 available for?

Dark Souls 3 is available for: