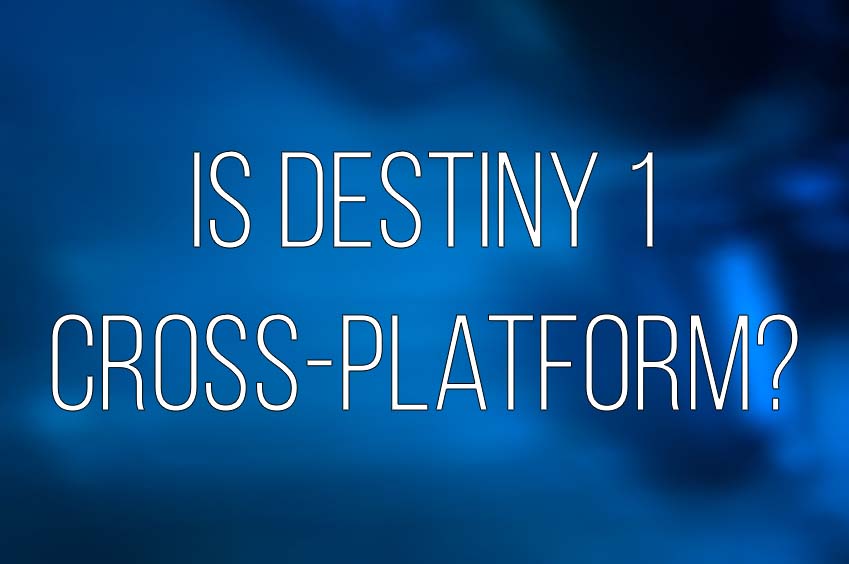 Destiny 1 (aka D1) is multiplatform and available for various Xbox and PlayStation console generations.

So is Destiny cross-play?

No, Destiny 1 isn’t cross-platform. That means that if you own a PlayStation, you can’t play together with the owners of an Xbox and vice versa. However, Destiny 1 does, to some extent, support cross-gen play through backward compatibility between PS5 and PS4 and between Xbox Series X/S and Xbox One. If you own an Xbox 360, you can only play with other Xbox 360 owners; likewise, if you own a PS3, you can only play with other PS3 owners.

Also, check out the article on crossplay in Destiny 2.

Here are the answers to some common questions about Destiny 1:

What does cross-platform mean?

Cross-platform means you can play a video game with other players on different platforms than yourself. So fx if you have a PlayStation, you can play with friends who own an Xbox and vice versa. Cross-platform is sometimes also known as crossplay.

So is Destiny 1 cross-generation, meaning does Destiny support cross-play between different generations of the same platform?

The short answer to this question is both yes and no. It depends on the platform. Let’s break it down:

See how to hide games from friends and family on Steam.

​What is Destiny? – A quick overview.

Destiny is an online first-person shooter game that has RPG elements. This game was made by the legendary studio behind the original Halo games.

Bungie set out to create its unique world and wanted to offer a multiplayer experience that would keep players coming back for more.

This game has a significant story element, but it’s also about getting better gear and strengthening as a guardian.

The story of Destiny is set approximately 700 years into the future. Humanity once thrived and traveled through space, but suddenly colonies collapsed, and the only remaining survivors were on Earth.

They were saved by a traveling white spherical celestial body known as “the Traveler.”

The collapse of human civilization and galactic prosperity was brought about by an enemy of the traveler known as Darkness.

The Travel imbues guardians with the power of light to battle the forces of darkness. It’s a pretty standard plot, but it has many science-fiction influences that keep things interesting when reduced to its base elements.

You’ll learn more about the lore in this game by playing through story missions and talking to NPCs.

When playing Destiny, you can choose between three different classes. You can play as the sturdy Titan, the powerful Warlock, and the deadly Hunter.

Each class has different abilities that will give them advantages in certain situations. You can level up as you play the game, and you’ll also be collecting gear to get stronger.

Destiny is really about continuing to get stronger and stronger gear. It can be considered a looter shooter because you’re constantly trying to find the best weapons.

There are also multiplayer modes where you can battle other guardians. This can be a fun, competitive game, but it’s more popular as a cooperative experience where you work alongside your friends to complete objectives and get stronger.

You might also like this article about how to get a yellow name on Steam and other customization options.

Bungie has released three DLCs for Destiny. They are:

​What platforms are Destiny available for?

Destiny is available for:

Into speed and GTA V? Check out this article on the top 10 fastest cars and motorcycles in GTA Online.