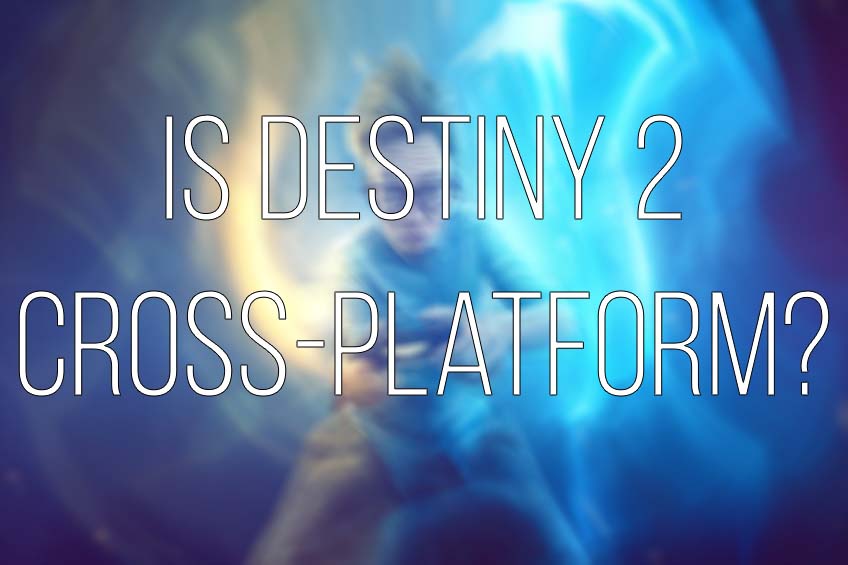 Destiny 2 (aka D2) is an online multiplayer first-person shooter that takes you planet-hopping in space to battle against evil creatures trying to ruin everything from everyone.

Destiny 2 (aka D2) is multiplatform and available for PC and consoles.

So is Destiny 2 cross-play?

Yes, since Season 15: Season of Lost (released August 24, 2021), Destiny 2 now supports cross-platform play between all platforms. That means that PC, Xbox (One and X|S), PlayStation (PS4 and PS5), and Stadia owners can all play together on the same servers.

Here are the answers to some common questions about Destiny 2:

What does cross-platform mean anyway?

Cross-platform means you can play a video game with other players on different platforms than yourself. So, if you have a PC or PlayStation, you can play with friends who own an Xbox and vice versa. Cross-platform is sometimes also known as crossplay.

In contrast to Destiny 1, which had no cross-play, Destiny 2 supports cross-play between these platforms.

Yes, Destiny 2 supports cross-progression (aka cross save) and Play Anywhere.

What does cross-progression mean?

Cross progression means that your in-game items like DLCs, skins, levels-progressions, and more are carried with you onto other gaming platforms. Cross-progression is sometimes referred to as cross-save. Destiny 2 is a true cross-save in that you can log in from any platform and continue playing from where you left off.

So is Destiny 2 cross-generation?

The answer is yes, Destiny 2 is cross-generation between all generations of the supported console platforms.

What does cross-gen mean?

Cross-gen stands for cross-generation and means that last-gen consoles can play together with current or next-generation consoles. Sometimes cross-gen is available through backward compatibility, but in the case of Destiny 2, the game supports true cross-play cross-gen.

Yes, since Season 15: Season of Lost (released August 24, 2021), Bungie has implemented BattlEye anti-cheat to battle cheating, such as flying, unlimited ammunition, and more in Destiny 2 (I’m looking at you, PC players!).

BattlEye works by detecting hacks and cheats used by players and then kicking and banning those players from playing the game online again.

BattlEye has successfully been implemented in games such as DayZ, ARK Survival, Fortnite, R6 Siege, PUBG, and more, and will make the online PvP-experience in Destiny 2 more enjoyable for everyone within the Crucible community as well.

​What is Destiny 2? – A quick overview for new players.

Destiny 2 is the sequel to the popular Destiny game from Bungie. It’s a game that improves on the Destiny experience in many ways, but it also feels very familiar for returning players.

The game was released in 2017 for PC, Xbox One, and Playstation 4. It has since come to other modern platforms and remains a very popular title with a dedicated fanbase.

You’ll find that D2 picks up right where D1 left off. One year after the SIVA Crisis, the Guardians are tasked with coming together to respond to a Red Legion assault on the Last City. A Red Legion commander attaches a device to the Traveler that begins draining it of its light.

The events of this game will see you responding to this attack, and you’ll also learn much more about the world that didn’t come to light in the first game.

The core gameplay loop is the same when compared to the original Destiny. You’ll be able to choose from one of three classes, and there are different perks and abilities to learn this time.

It’s possible to become even more powerful as you play the game.

You’ll be working through story missions and other challenges to level up, and you’ll also be seeking out new equipment and weapons.

Destiny 2 is a first-person shooter but also a multiplayer RPG. Your goal is to improve your character and get stronger.

Like its predecessor, D2 falls into the looter shooter genre since it focuses on finding new weapons. You should also know that the game has cooperative and competitive multiplayer elements.

You might also enjoy the article on how to share your games library on Steam with family and friends.

Since its initial release of D2, Bungie has begun creating an overall story arch through various updates. They are:

​What platforms are Destiny 2 available for?

D2 is available for:

Also, check out how to hide games from friends on Steam.