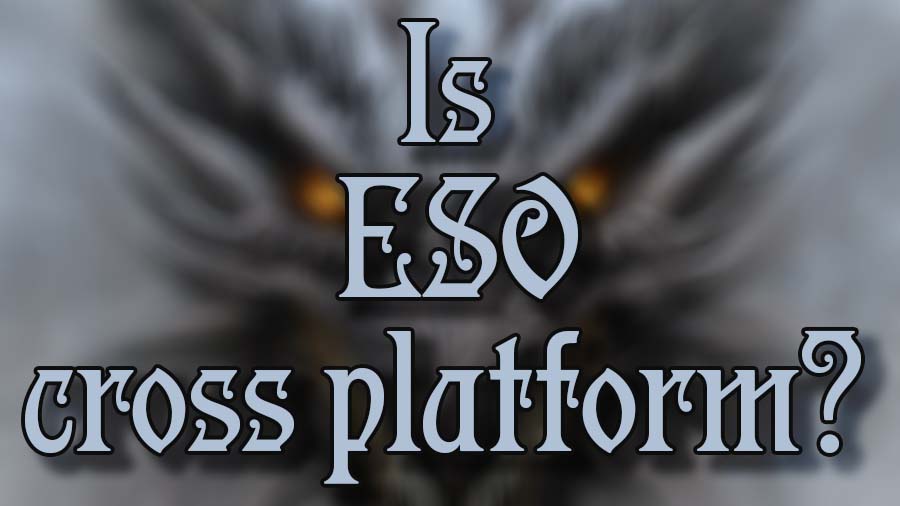 I’ve always loved the Elder Scrolls universe – not least Skyrim, which I completed on both PC and PS3 (and still visits from time to time on PC with mods installed).

Elder Scrolls Online (aka ESO) is an MMORPG version of the popular Elder Scrolls series. It came out in 2014 but has received many updates and expansions.

So to remain somewhat insane, in this article, The Elder Scrolls Online and ESO refers to the updated Tamriel Unlimited and later updates.

Currently, there are many different realms to explore in Elder Scrolls Online. Players can explore Tamriel on gaming platforms such as PC, Xbox One, Xbox Series, Playstation 4, and Playstation 5.

Being a multiplatform MMORPG begs the question, is Elder Scrolls Online crossplay?

Elder Scrolls Online is cross-platform between PC, Mac, and Stadia, but not between those platforms and PlayStation or Xbox. Also, ESO isn’t crossplay between Xbox One or Xbox Series X/S and PS4 or PS5. However, ESO is cross-gen through backward compatibility allowing players within the same console platform family – fx PS4 and PS5 – to play the game together.

Revisit Tamriel below and see the answers to some faqs Elder Scrolls Online:

Check out the guide to gold farming in Elder Scrolls Online.

Yes, The Elder Scrolls Online is canon, as ESO is set within the same universe, timeline, and lore as the single-player games such as Skyrim, Oblivion, and Morrowind.

No, ESO isn’t paid to win. While it’s true that you use real money to purchase tokens called Crowns and convert these to gold to purchase in-game items, these items are purely cosmetic and won’t give any players an unfair advantage. They look pretty, though!

No, Elder Scrolls Online doesn’t require a monthly subscription after you purchase the base game, ESO is free to play.

You can play most ESO as a single-player game if you prefer. But it becomes much more fun if you hook up with friends for some nice co-op monster-slashing online. Some areas are group zones you won’t be able to complete as a solo.

See how to upgrade Shire Gear in Final Fantasy 14.

When writing this, Elder Scrolls Online is free on Xbox Game Pass and will give you access to the Morrowind upgrade. This is only for Xbox consoles, though. ESO isn’t available on Game Pass for PC and is not a Play Anywhere game.

What is Elder Scrolls Online? – A quick overview for noobs.

The Elder Scrolls Online takes place in Tamriel during the Second Era. The events of this game occur 100 years before Skyrim and 800 years before Morrowind and Oblivion.

One of the biggest plot points of this game involves Daedric Prince Molag Bal attempting to meld the plane of Mundus with his realm of Coldharbour.

There are many other plot points, though, and you will be tasked with saving the entirety of Tamriel in several ways while playing this title.

Those familiar with MMORPGs will feel at home playing Elder Scrolls Online. You’re going to choose from six different classes to start. There are also ten different races to choose from when making your player character. Each option will have different stats and natural abilities.

You’ll be getting stronger and progressing as a character through completing quests. There are also many choices you can make in the game that will impact how things play out.

You can choose to team up with friends, and it’s easy to invite them to play the game with you. It’s also possible to meet players in the game and ask if they want to team up to take down tough areas.

You can play some missions by yourself, but many of the quests will be easier if you have some friends on your side. Keep this in mind when deciding whether this game will be right for you.

What platforms are Elder Scrolls Online available for?

Elder Scrolls Online is available for: