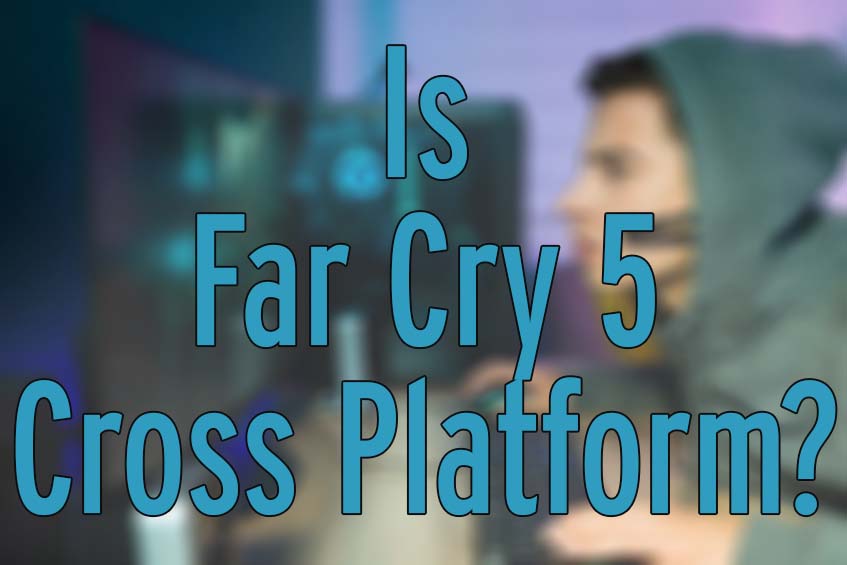 Far Cry 5 (aka FC6) is a 2018 open-world first-person shooter developed by Ubisoft Montreal and Ubisoft Toronto.

It’s the fifth main installment in the popular Far Cry series and is the first Far Cry title to take place in the United States.

It’s set in a fictional rural region of Montana, and the plot concerns a doomsday cult.

You can play FC5 as a single-player and multiplayer co-op.

But is Far Cry 5 cross-platform?

Far Cry 5 isn’t cross-platform. That is, you can crossplay between fx PC and consoles or between different consoles. However, FC5 supports cross-generation play through backward compatibility for Xbox and PlayStation. Also, the game supports most cross save through the cloud for Ubisoft Connect and Amazon Luna and a co-op with friends on the same platform as yourself.

Also, check out Is Far Cry 6 worth it?

Pick your favorite hillbilly bandana and see answers to more FAQs below:

Far Cry 5 is a cross-progression between Ubisoft Connect and Amazon Luna with Ubisoft+. This means that the game supports cross-save through the cloud.

A note on Far Cry 5 cross-progression and co-op

Like is the case with Far Cry 6, you should know that only the host’s progression is saved when you play the game as a co-op. So even though you’ve completed the whole campaign together, it’s essentially only the host that gets the credit for it.

The story of Far Cry 5 takes place in a fictional area of Montana known as Hope County. In this area, a doomsday cult leader named Joseph Seed controls much of the population.

Seed preaches about a coming collapse and has convinced people that he has been sent by god to protect them.

The player is sent in as part of a task force meant to arrest Seed, but players will run into ample resistance due to Seed’s sway over the locals.

Into streaming? Check out the guide to the best ring lights for gamers.

When you play Far Cry 5, it’ll be a very immersive open-world experience. This is a first-person shooter where you’ll be fighting enemies and exploring the area. You can explore on foot, but you’ll also be able to drive various vehicles to get around.

I especially enjoyed taking old crop duster planes in the air and chasing down bulls on tractors.

The action is very satisfying, and you will have access to close-quarters fighting options, such as melee weapons and firearms.

Players will be doing various tasks as they attempt to retake Hope County from the villainous Joseph Seed. You’d be recruiting people to your cause, liberating labor camps, and doing many other things that you might be familiar with if you played earlier Far Cry titles.

This game also has multiplayer features. You can play in co-op with your friends. The Far Cry Arcade mode has a map maker function that is separate from the main game.

There are three minor DLCs to Far Cry 5 and one major standalone game. The three DLCs are:

The major expansion to Far Cry 5 is called Far Cry New Dawn (2019). It’s a narrative sequel to the original Far Cry 5, which follows survivors of a nuclear war – “the Collapse.”

The story is set 17 years after the events in Far Cry 5 as they struggle to survive in the toxic landscape. You’ll also have to deal with the Highwaymen, led by the ruthless twin sisters Mickey and Lou, who terrorizes the community.

What platforms are Far Cry 5 Available For?

Far Cry 5 is available for: