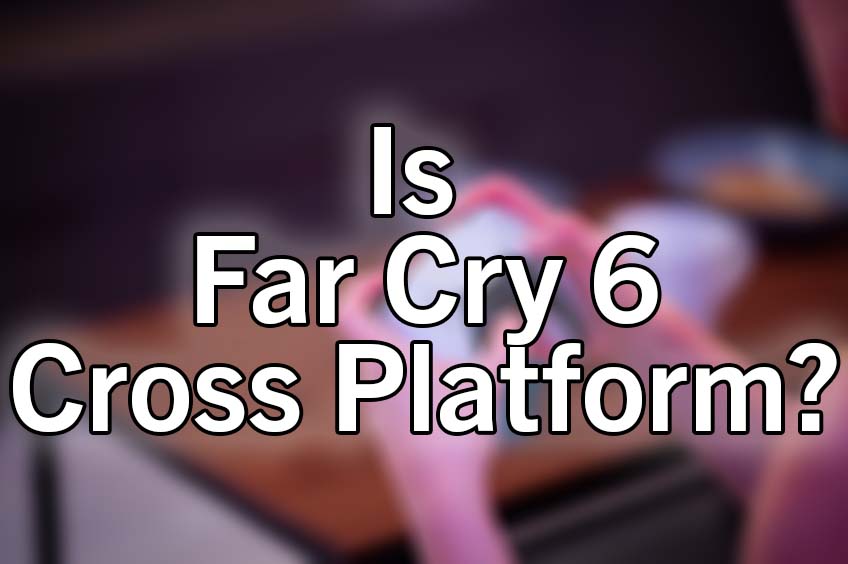 Far Cry 6 (aka FC6) is an open-world first-person shooter game developed by Ubisoft Toronto and published by Ubisoft.

It was released on October 7, 2021, and it’s the sixth mainline installment in the popular Far Cry franchise.

FC6 offers players both single-player and multiplayer experiences, but is Far Cry 6 cross-platform?

Far Cry 6 isn’t cross-platform. That is, you can crossplay between fx PC and consoles or between different consoles. However, FC6 supports cross-generation play within the same platform family (fx Xbox or PlayStation). Also, the game supports most cross-save between all platforms through the cloud and co-op with friends on the same platform as yourself (see more in the FAQ below).

Also, check out Is Far Cry 6 worth it?

Put on your Guerilla warfare gear, and let’s dive deep into the island jungle and discover the truths of some FC6 FAQs.

Yes, Far Cry 6 is cross-progression between all platforms. This means the game supports cross-save between all supported platforms through the cloud – although not everything is supported (see below).

All you have to do is manually upload the save to the cloud. Then launch the game on the new platform, and select Load Save from the Cloud from the main menu.

Note that DLCs and Far Cry Credits are only cross-save between consoles within the same family and when purchased through the platform’s store – fx between PS4 and PS5, but not PlayStation and Xbox.

A note on Far Cry 6 cross-progression and co-op

Like was the case with Far Cry 5 and New Dawn when you play co-op, you should know that it is only the progression of the host that is saved. So even though you’ve completed the whole campaign together, it’s essentially only the host that gets the credit for it.

If you’re not the host, you’ll still keep your level progress (leveling up) and any weapons and upgraded items and resources you may have gathered from the co-op campaign.

The setting of Far Cry 6 is a fictional Caribbean island known as Yara. The location is inspired by Cuba, and it features the largest world map of any Far Cry game.

The Yara island is ruled by a ruthless dictator named Anton Castillo. Castillo is referred to as El Presidente by most, and he’s considered to be a fascist.

You’ll be playing as a local Yaran named Dani Rojas, a former Yaran armed forces member turned guerrilla fighter who wants to restore freedom to the island of Yaran.

The game’s events will see Dani push toward that goal while coming into direct conflict with Castillo’s forces.

It’s possible to choose Dani’s gender at the start of the game, but your backstory will be the same no matter what.

As is typical in Far Cry games, you’ll be going around the map completing objectives to help resistance forces. This could involve liberating certain areas or otherwise sabotaging Castillo’s plans.

Players will experience the largest open-world map in a Far Cry game – even bigger than the huge hillbilly and cult-infested map of Hope County in Far Cry 5. The island of Yara is a huge map to explore, and there are many different things to do.

You’ll be able to drive around in vehicles, gather NPC characters to fight for your cause, and do whatever it takes to topple Castillo’s regime. You can also make makeshift weapons to help you get by.

It’s a big game with plenty to do for those who consider themselves to be completionists. You can even play through this title with a friend in co-op if you want to.

What platforms are Far Cry 6 Available For?

Far Cry 6 is available for: