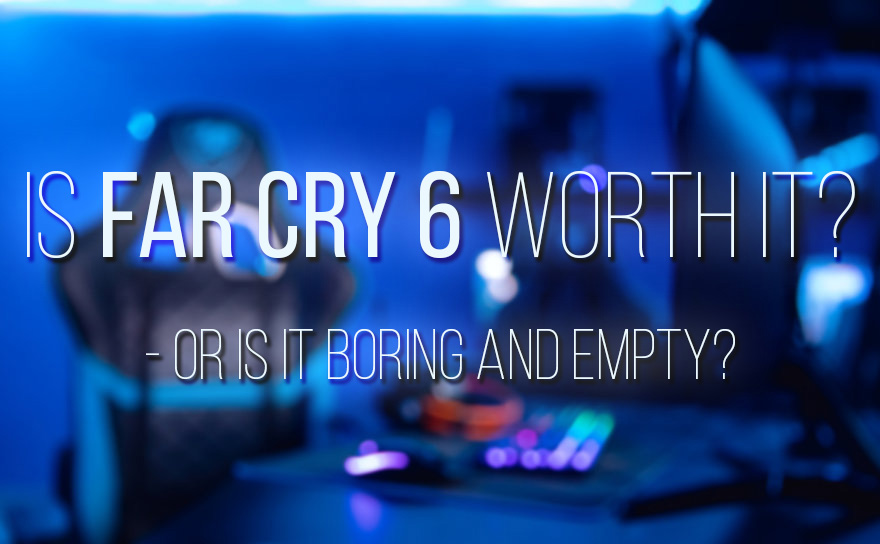 I loved playing Far Cry 5! I played it with a good friend, and we had so much fun driving around as hillbillies causing all sorts of mayhem.

The main storyline was great, and the powerful cult leader Joseph Seed was a charismatic and complex antagonist.

Plus, the animated cutscenes were great, and the voice acting by Greg Bryk was outstanding!

So, of course, we had been eagerly anticipating Far Cry 6. But I must say that it has been a disappointment.

Why is Far Cry 6 empty and boring?

Far Cry 6 is gorgeous! I often find myself stopping up to look at the golden-hour sunset over the ocean or distant mountains and palm trees.

So why does Far Cry 6 feel so empty and boring?

The short answer is, that the map is huge, but there’s nothing to do unless you follow the main storyline.

In Far Cry 5, there were many things to do even if you strayed off the main storyline path. You could free roam as much as you want and still find enemies to battle. And you could always capture a strategic point filled with baddies.

In Far Cry 6 however, you can free roam, but you won’t meet many enemies besides the occasionally hostile wildlife or a soldier on a horse.

Also, it’s empty if you get to a stronghold that is part of the main storyline. Not a soldier to be seen even though it should be swarming with the villain Antón Castillo’s soldiers.

But if you go back to the main storyline, and visit the place again 5 minutes later as part of the campaign, now suddenly, the stronghold is filled with enemies.

You’d expect an important strategy for the dictatorship would at least have some guards stationed at all times. But that isn’t the case if you don’t follow the path intended by UBISOFT.

The world of Far Cry 6 is empty and dead

To me, this makes the whole world of Far Cry 6 feel empty and dead.

One of the things the Far Cry series is known for is the big maps and the ability for the player to free roam the beautiful maps.

In earlier installments, you could pick your own fights if you didn’t want to progress in the main storyline but just have some fun.

In Far Cry 6, there’s almost no fun outside the campaign. Even if you visit the Capital of Esperanza, it feels like the city is in a constant state of siesta.

The UI and weapon designs are clunky and confusing

This isn’t about FC6 being boring, but I just had to get it off my chest.

I also find the user interface and the way you create and upgrade weapons to be really confusing. It’s unnecessarily complex, but not because of the many options to customize your gear, but because of how it’s implemented.

I see some parallels with the UI and customization options in Far Cry 5 New Dawn (which also felt empty – but here, it kind of made sense because of the nuclear catastrophe).

But even though I didn’t particularly enjoy the design in New Dawn, it still worked much better and was more intuitive than in FC6.

I think the developers messed up here too.

Other quirks in Far Cry 6 which I don’t like

The co-op part doesn’t work very well, either. Fx, it’s only the host that gets most of the base upgrades.

Let me give you an example.

When I played Far Cry 6 with my friend, he hosted the game. As we progressed through the game, he received a wing suit as part of a quest.

I, however, didn’t receive one, and there was no way to get one when playing co-op. This made it impossible to complete some of the quests – one where we had to follow a bird in the sky – because he would always get too far away from me.

If I were to get a wing-suit, we had to quit playing co-op – and then I had to play the game as a single-player campaign up to the same point to get the wingsuit. Then I could join a coop again.

Eventually, we found a way through.

To get a wingsuit in Far Cry 6 co-op, the host has to take off from a cliff. Then I should plunge to my death from the same cliff. When I respawned, I would respawn in the air with him while wearing a wing-suit – even though I only had a parachute in my inventory.

So is Far Cry 6 worth it? I’d say no. The graphics of the island of Yara is stunningly beautiful. It’s one of the most beautiful games I’ve ever played up to this point. But the world feels empty and boring.

It’s like Ubisoft has created a map designed for free-roaming but forgotten actually to put stuff on there to interact with.

This makes Far Cry 6 a linear game in a free-roaming world, which makes it a boring and conflicting experience.

And not even my awesome pet Guapo or making a million tacos for Danny Trejo can make up for this fact.

I’d skip this game now and cross my fingers for better gameplay in Far Cry 7.