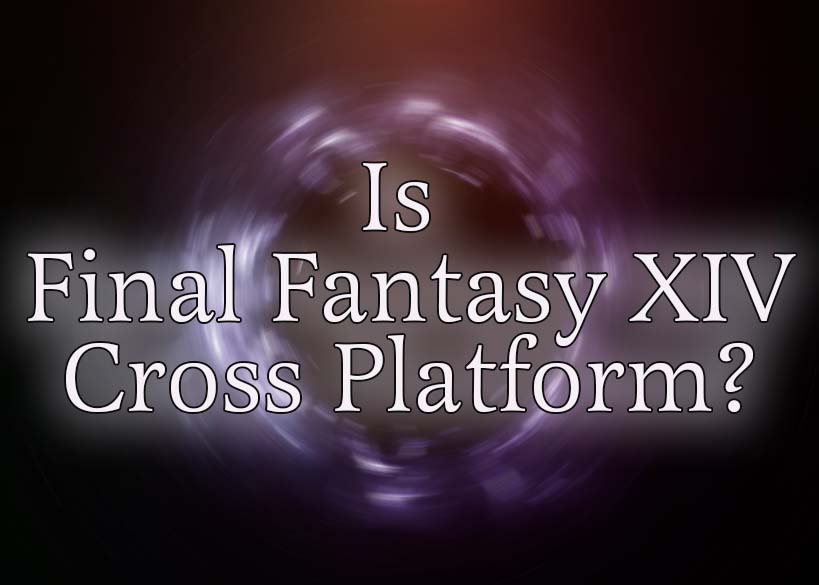 Final Fantasy XIV (aka FFXIV or FF14) is a popular MMORPG that has been out since 2010. It was originally released for PC, but it has since come to many other platforms, and it’s also changed a lot.

FFXIV is the second MMORPG in the Final Fantasy franchise following the success of Final Fantasy XI. The game has achieved massive critical and commercial success, becoming one of the most loved MMORPGs of modern times

Being one of the few MMORPGs set in the universe raises the question: is Final Fantasy XIV cross-platform?

FFXIV is cross-platform between PC, Mac, PS3, PS4, and PS5. That means you can cross-play with friends on PlayStation if you’re running Final Fantasy XIV on Microsoft Windows or macOS and vice versa. FFXIV is also true cross gen allowing players on PS3 to play with owners of PS4 and PS5. FFXIV is also cross-save and cross-progression, however, for cross-save to work, you’ll need to purchase a license to the base game and any DLCs you want access to on both platforms (see more under the FAQ).

Check out the guide on how to upgrade shire gear in FFXIV.

Here are the answers to some other common questions about Final Fantasy XIV:

No, Final Fantasy XIV isn’t free. It requires purchasing the base game (plus any DLCs you’d like to play). Since the Heavensward expansion, new players can play up to level 60 of the FFXIV base game for free without any time limits. So that’s a nice way to test out the waters of Eorzea.

Also, FFXIV is subscription based, meaning you’ll have to pay a monthly fee to play the game.

See how to mine in FFXIV.

Yes, FFXIV is cross-progression. That means it allows a cross-save between PC, Mac, and PlayStation. However, you need to be aware of a couple of things, which I’ll break down here.

First, you’ll need to purchase licenses for the platforms – fx between PC and PlayStation. After you’ve obtained the license (for the base game and the DLCs) to a different platform, you need to add them to your player account via Mogstation.

Your subscription to the game will work on all platforms, though.

Second, you must be aware that the game differs between locally stored and server-side progress.

Locally stored progress includes system settings, Gear Sets, Hotbars, and HUD layout. These are all saved locally on your hard drive. To transfer these, you must save them to your character on the character screen.

Remember to save global and character-specific settings to access these on another platform. When logging into the game on the new platform, you can download these settings again to make the game look the same.

Server-side stored progress is things like your story progress, job levels, etc. These are already cross-saved on the server side, so to access these from another platform, you must log in to continue your progress.

You should also note that if you don’t purchase a license for the same DLCs on both platforms, you can’t access any DLC expansion zones on the platform that hasn’t got a license for this.

Weaponize your Echo and find out now.

Check out how to take screenshots on PC and PS4 in FFXIV.

The tale of Final Fantasy XIV begins with the player character waking up in one of the three main states of Eorzea. Your player character awakens to a power known as the echo that allows them to see the past.

You’ll be dealing with conflicts between nations, but eventually, you’ll unearth greater threats that involve arcane magic and technology. This title takes inspiration from many of the mainline Final Fantasy games of the past, and there’s a lot to enjoy for long-time fans of the series.

Check out how to hide the UI in Final Fantasy 14.

Final Fantasy XIV plays very much like a standard MMORPG. You’ll pick a character class at the beginning of the game that will determine what types of attacks and spells you can do.

Players can complete various quests to gain experience and grow more powerful. You can take on story quests or “levequests,” essentially the game’s side quests.

Final Fantasy XIV differs from Final Fantasy XI in that you can play the game solo in many instances. You’ll be able to join parties with other people, which will be the best bet for taking on difficult quests.

However, players can enjoy solo content much easier than in the previous Final Fantasy MMO. You’ll also be able to customize your character quite well, and there are many different races to choose from.

​What platforms are Final Fantasy XIV available for?

Final Fantasy XIV is available for: