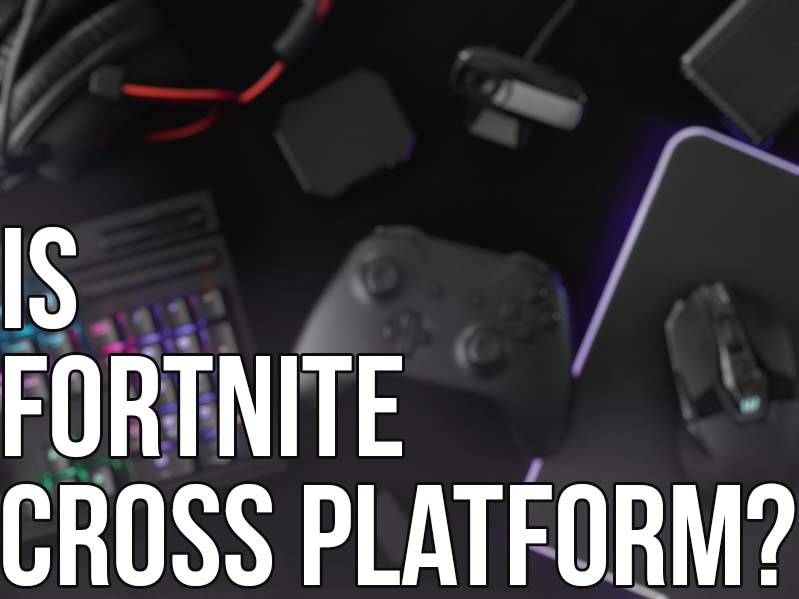 Fortnite is a wildly popular battle royale game that millions of people play daily. It was developed by Epic Games and released in 2017.

At its core, Fortnite is a game that merges the construction gameplay of Minecraft with the hectic nature of shooting games.

At first, the game was released as a player-versus-environment (PVE) experience, but it later transitioned into the battle royale game for which it has become famous today.

Being such a popular multiplayer game brings the question, is Fortnite cross-platform?

Fortnite is cross-platform between PC, Mac, PS4, PS5, Xbox One, Xbox Series X/S, Android, and Switch. That means you can cross-play Fortnite with friends on consoles if you’re running Fortnite on Microsoft Windows, macOS, or Android and vice versa. For the cross-platform play to work, everyone must have linked their games to an Epic Games account.

Check out the best budget laptops for playing Minecraft.

Here are the answers to some other common questions about Fortnite:

Yes, Fortnite is cross-progression, which means that the game support cross-save between different platforms, so your progress and items are carried over from wherever you log in to play the game.

Yes, you can play Fortnite on a split-screen on a console. In other words, there’s local couch co-op play for you. However, some game modes (like Solo, Creative, and Team Rumble) aren’t available as split-screen.

Also, you’ll each need a game account for this to work.

Is Fortnite online only?

Yes, Fortnite is online only, which means you can’t play it offline, and it requires a working internet connection.

Check out how to make infinite lava in Minecraft.

​What is Fortnite? – A quick introduction for new players.

As mentioned in the introduction, Fortnite started as a PvE game with a story. However, the story of Fortnite is now considered separate from the famous battle royale mode players love.

The story or campaign mode is known as Fortnite: Save the World. This is a cooperative game where you can play with up to three friends to finish missions. T

The story involves a storm appearing and causing 98% of the earth’s population to disappear, leaving only zombie-like husks behind.

The gameplay in Fortnite is a mix of different types of gameplay you’re likely familiar with.

Players are dropped into an open-world environment and tasked with being the last man (or team) standing in the battle royale mode.

Fortnite has standard shooter controls that you’d expect from games in this genre, but there is also a crafting element to contend with.

You can play the popular battle royale mode solo, but you can also play as a duo with another player or in a team of up to four players.

You won’t even have a weapon when you drop into the map. Once you land, it will be necessary to scavenge weapons, resources, and vehicles while trying to survive against other players.

While playing Fortnite, the safe area of the map shrinks in size due to a storm, which forces players to come into conflict with each other eventually. If you can survive until the end, you’ll be declared the winner (along with your duo or squad if you’re playing with a team).

There’s also a Fortnite creative mode that allows players to explore maps. They’re free to spawn anything within the game on an island, meaning players can create their games. It’s essentially a mode that is similar to Minecraft.

Check out how to reduce ping in another popular battle-royale game: PUBG.

​What platforms are Fortnite available for?

Fortnite is available for: