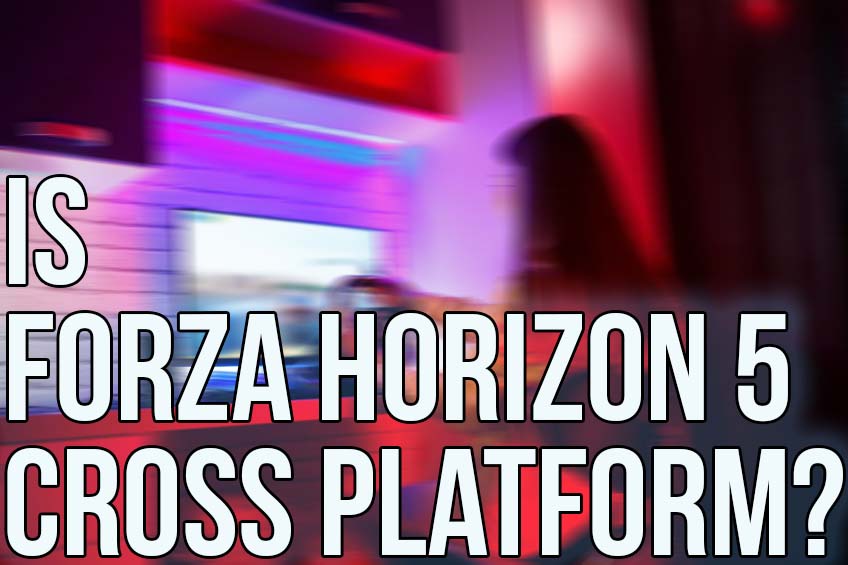 Forza Horizon 5 (aka FH5) is a racing game developed by Playground Games and published by Xbox Game Studios on November 9, 2021.

As the fifth installment in the Forza Horizon series, FH5 is the biggest racing game yet, with a huge map to explore. These games have open-world environments that players can race around and enjoy in either single-player or multiplayer modes.

I’m especially fond of the new dynamic weather system because I often find it’s something I miss in many racing games. A racing game isn’t a racing game without snow and rain!

The game is available on PC, Xbox consoles, and xCloud streaming, so racing against your friends on other platforms is something many players want.

But is Forza Horizon 5 cross-platform? Strap on your racing helmet, and let’s find out.

Yes, Forza Horizon 5 is cross-platform between PC, Xbox, and xCloud. If you’re on PC and have bought the game on Microsoft/Xbox store or Steam, you can play with friends on either Xbox (One, One X/S, and Series X/S) and those streaming the game from the cloud and vice versa. The game is also cross-gen between the supported Xbox versions. FH5 doesn’t have a cross-save between Steam and other platforms, though.

Here are the answers to some other frequently asked questions about Forza Horizon 5:

No, unfortunately, you can’t use mods in Forza Horizon 5.

The 4K detail and the stable frame rates needed to give a smooth racing experience are too much for the current generation of VR headsets. It would be cool, though, as the game is gorgeous.

You can, however, use VorpX or Steam’s Virtual Desktop software to get it working – but it’s going to take some tweaking.

Yes, Forza Horizon 5 supports cross-progression, and you can even import liveries from previous titles.

However, you can only cross-save between different platforms purchased through the Windows/Xbox store.

That means that if you’ve purchased FH5 through Steam, then you can’t import your saves to fx Xbox. You can still cross-play with friends who’ve purchased the game through Microsoft/Xbox.

Yes, if you own an Xbox Series X, you’ll get the version that matches the performance of that machine.

What type of racing game is Forza Horizon 5 exactly?

While Forza Horizon 5 doesn’t have a story mode, it will have a gorgeous setting for players to enjoy. This open-world racing title takes place in Mexico, and the map is said to be 50% larger than the map in Forza Horizon 4.

It’s a gorgeous experience full of beautiful vistas and interesting racing environments. Players can get to know every inch of the map at their leisure due to the open-world design philosophy.

Open-world game design means that Forza Horizon 5 allows players to explore and go where they want to. You won’t be strictly racing since you can also drive around and enjoy looking at everything.

There is a lot to see and experience, and the fact that this is the largest game in the franchise yet helps. Any racing fans who want to experience driving in a massive open-world set in Mexico will love this title.

You’ll have various race types that you can choose from as well. It’s even possible to chart and create your races if you enjoy a stretch of the map.

There’s a gorgeous dynamic weather system, ancient Mayan temples, an active volcano, and much more on this huge world map.

Driving around with your friends online to see everything can also increase the enjoyment of this title.

What platforms are Forza Horizon 5 available for?

Forza Horizon 5 is available for: