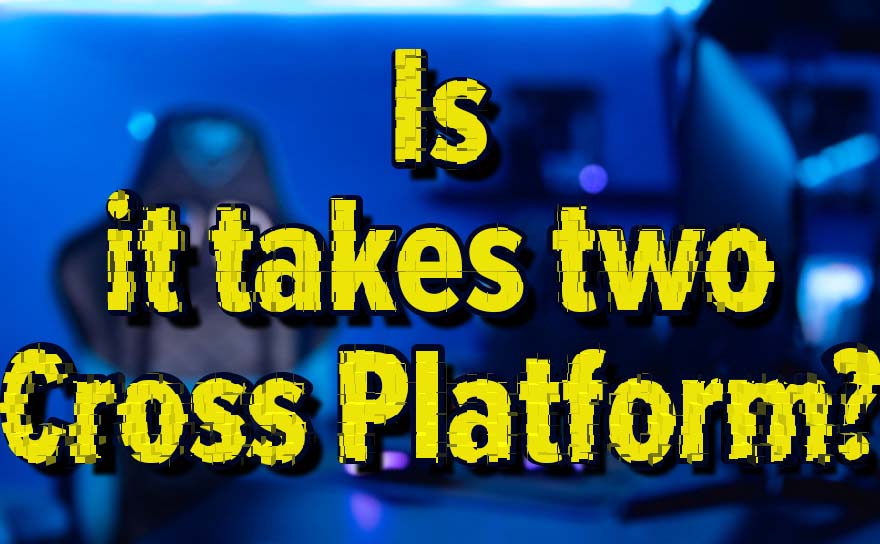 It Takes Two is a 2021 co-op action-adventure title developed by Hazelight Studios and published by Electronic Arts. And, in many ways, the game is an evolution of the previous Hazelight Studios title, A Way Out.

This is a game that you cannot play by yourself. You must have a co-op partner for couch co-op or online play.

So that begs the question, is It Takes Two cross-platform?

Grab your partner and see more answers below:

Is It Takes Two split screen?

Yes, It Takes Two is split screen. I played it with my son on a laptop connected to our television with two Xbox controllers, and it was split screen.

Is It Takes Two hard?

Sometimes It Takes Two is a challenging game. However, I completed the game with my 6-year-old, and he had no problems understanding the puzzles and doing the tasks.

Is It Takes Two good?

Yes, It Takes Two is a good game. I’d say it’s one of the best puzzle co-op games I’ve ever played. The story is beautiful and well-written, the graphics are stunning (even running on a low-tier laptop), the gameplay is amazingly varied, the puzzles are fun and varied, the minigames are fun, and the overall creativity of the game is amazing. So if you’re wondering: is It Takes Two worth it? YES! It Takes Two is worth it.

Also, see the guide to the best ring lights for streaming.

What is It Takes Two Friends Pass?

Friend’s Pass means you can invite a friend to join It Takes Two even if they don’t own the game.

​Is It Takes Two cross progression?

Yes, It Takes Two is cross-progression, which means the game supports cross-save between different platforms – but only within the same platform system. That means that cross-save is connected to the cross-generation feature on the Friends Pass, allowing you to save the game on PS4 and continue on PS5 and vice versa or between Xbox One and Xbox Series X/S.

​Is It Takes Two on Switch?

No, It Takes Two isn’t available on Nintendo Switch when writing this. I doubt the platform will handle the online servers needed to run the game.

​Is It Takes Two local co-op?

You can play It Takes Two as a local couch co-op split-screen.

​Is It Takes Two online only?

No, It Takes Two doesn’t require a working internet connection, and you can even play the game as local couch co-op offline.

​What is It Takes Two? – A quick overview.

It Takes Two is about learning to work with your co-op partner. You must solve puzzles, do basic platforming challenges, and use teamwork to make your way through the game.

It Takes Two involves a married couple named Cody and May planning to divorce.

The couple constantly argues about various life matters, telling their daughter Rose they will get divorced.

The daughter creates dolls that look like her parents to try to get them to work out their relationship through play-acting.

Somehow, the parents get trapped inside the dolls’ bodies and must work together to reach their daughter and escape this predicament.

The gameplay mechanics of It Takes Two aren’t anything new, but they come together in fun ways.

The entire game was designed to be played on split-screen, and it’s always going to be necessary to coordinate with your partner if you want to succeed.

You could play this game with your significant other, but it also might be fun to work through this title with a friend.

The game has a very interesting story, and seeing how the married couple changes throughout the game can be appealing.

It would be best if you decided whether you would work together to see this game through to the end.

​What platforms are It Takes Two available for?

It Takes Two is available for: