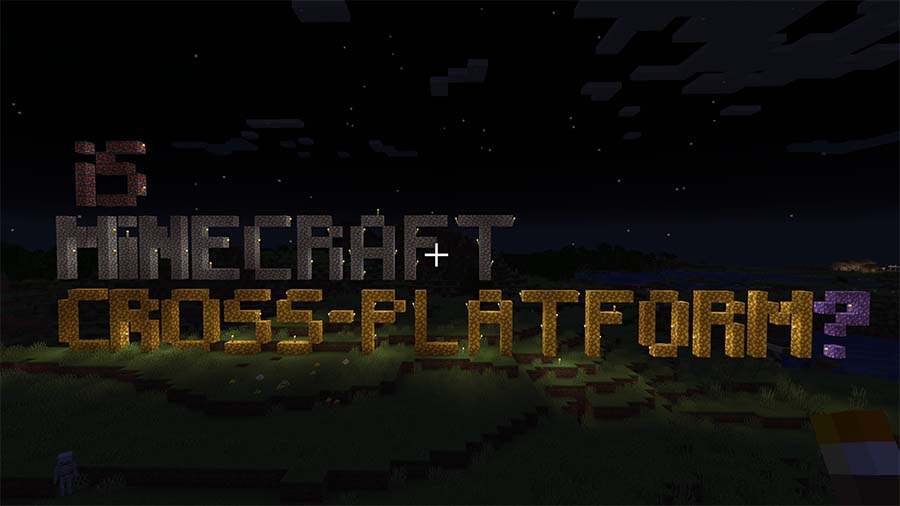 Minecraft is one of the most popular games ever created. It was developed by Mojang, and it originally came out in November 2011 as a fully-released title.

The game has since been ported to many different platforms, and Microsoft bought Mojang after seeing the massive potential of Minecraft. This sandbox game allows players to explore and create content to their hearts.

But is Minecraft cross-platform?

Luckily, since June 2022, you now get both versions when you buy Minecraft through the Windows store.

Check out the best budget-friendly laptops for playing Minecraft.

Here are the answers to some other common questions about Minecraft:

Yes, Minecraft is cross-gen. That means Xbox Series X/S owners can crossplay Minecraft with Xbox One and Xbox 360 owners. Likewise, PS5 players can play Minecraft together with PS4 players.

Yes, Minecraft is cross-progression through the cloud. This means the game supports cross-save across different platforms as long as you’re logged into the same Microsoft account. This also means that cross-save progression isn’t available between the Bedrock and Java editions.

Is Minecraft cross-platform on Nintendo Wii U?

Minecraft isn’t cross-platform multiplayer on Nintendo Wii U because it uses a specific version of the game called the Minecraft WiiU Edition, made specifically for this platform.

Having trouble building? Check out how to turn off mouse acceleration in Minecraft.

Is Minecraft cross-platform on Nintendo 3DS?

No, Minecraft isn’t cross-platform multiplayer on Nintendo 3DS. While the game runs okay after it was patched, the 3DS isn’t powerful enough to crossplay with other platforms.

Yes, you can play Minecraft as a local couch co-op split-screen – but only on the console and the Minecraft: Bedrock Edition. Up to four players can share the screen at the same time.

If you’re still playing one of the Legacy Editions of the game, this feature is still available – except for the PS Vita version.

See how to make a water elevator in MC.

New to Minecraft? – Here’s a quick overview of the different versions.

If you’re new to Minecraft, here’s a quick introduction.

In Minecraft, you’re placed in a biome of some sort, and you’re tasked with surviving and building yourself a home.

Players can approach the game however they want to, and it’s up to you whether you want to play around or explore and see everything the biome offers.

You can try to venture to an area known as the Nether to defeat the Ender Dragon, which is generally seen as “completing” the game even though the game never truly ends.

You play Minecraft by searching for resources and building things. Players can cut down trees, mine various stones, and use the materials to build better tools or structures.

You get stronger as you craft better armor and weapons. This is important because there are hostile monsters and creatures out there that you’ll need to defend yourself against.

Exploring is the biggest thing to do in Minecraft, though. Players love exploring and seeing what they can find in this title. It’s also fun to build things and allow yourself to be creative.

Some people have made amazing things inside of Minecraft, and the game is only limited by your imagination.

Check out this great guide to flags and banners in Minecraft.

​What platforms are Minecraft available for?

Minecraft is available for:

Discontinued Legacy console editions and other special editions of Minecraft:

What is Minecraft Realms?

Minecraft Realms isn’t a game. It’s a subscription-based service that gives Minecraft players access to their private servers, and it was released in 2014.

You’ll just be playing Minecraft when you sign up for Minecraft Realms. As such, this doesn’t make any changes to the base game.

You’ll be playing the normal versions of Minecraft that are available to the public, but you’ll be able to host private games with friends easily. If this is appealing to you, then looking into subscribing makes sense.

There won’t be any changes to the standard gameplay when you have a Minecraft Realms subscription. You will be able to do some interesting things, though. For example, you could temporarily replace the world map with a mini-game you and your friends can enjoy.

Players will get kicked for inactivity in Minecraft when playing using Realms, and you also need to be above the age of 16 to play or have parental consent.

What Is Minecraft Java?

Minecraft Java Edition is the original version of Minecraft that was developed by Mojang Studios. It was created by Markus “Notch” Peterson, and it was made using the Java programming language.

This is why the game is commonly referred to as Minecraft Java today. There are some differences between the original version and the “Bedrock” version that you’ll find on more modern platforms.

Feeling geeky? See how to refresh chunks in Minecraft.

As with the other iterations of Minecraft, this doesn’t have much of a traditional story. Minecraft Java Edition is a game that is about surviving and creating.

You’ll be exploring environments and building things during your time with the game. You can also play with friends, and it’s possible to create your own stories as you have fun with the game.

The gameplay in Minecraft Java Edition isn’t drastically different from what you will experience playing the bedrock version of the title. You’ll still be mining for materials, building things, surviving, and exploring the environment.

The core gameplay loop is the same, but the java version has some things that make it appealing to players. For example, players can use custom skins by installing mods in this game version.