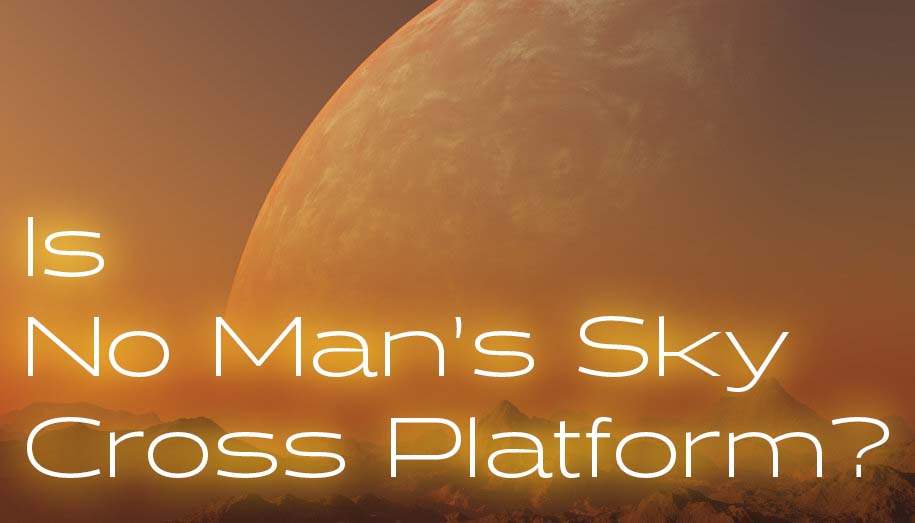 No Man’s Sky (NMS) is a survival game in space and alien worlds. It was developed and published by Hello Games and released on August 9, 2016.

The game had a lot of buzz and promise before it came out, but some critics and fans were underwhelmed by the gameplay and amount of content available at launch.

The developers have patched the game and added a lot to the experience since its 2016 launch. And it is also possible to download a bunch of cool mods, to make the game even better.

So is No Man’s Sky crossplay?

Yes, No Man’s Sky is cross-platform between PC, PlayStation, and Xbox, which means that you can crossplay No Man’s Sky with friends on PS4 and PS5 as well as Xbox One and Xbox Series X/S if fx you’re on Windows and vice versa. This has been possible since the June 11th, 2020, update and allows players to explore the galaxy together and build and trade.

Don’t be left in the dark. See the best ring lights for live streaming.

Suit up in your favorite space outfit and see the answers to more questions about No Man’s Sky:

​Is No Man’s Sky cross-progression?

No, No Man’s Sky isn’t cross-progression in the traditional sense, which means the game doesn’t support cross save between different platforms. However, you can transfer your stuff from last-gen to next-gen consoles if you upgrade your system.

Is No Man’s Sky cross-generation?

And if you already own the game on PS4 or Xbox One, you’re entitled to a free upgrade to the next-gen version, and you can easily transfer all your stuff to PS5 or Xbox Series X/S.

Into space exploration? Check out more on crossplay in Elite Dangerous.

No Man’s Sky runs 4K 60 fps on PS5 and Xbox Series X consoles. If you own an Xbox Series S, you can toggle between running the game at 30fps or 60fps.

​Is No Man’s Sky on Game Pass?

Yes, No Man’s Sky is on Game Pass. Since the game’s introduction to the Windows 10 store and Game Pass, the cross-platform play became available.

​Is No Man’s Sky crossplay on Steam?

Yes, NMS is crossplay on Steam, which means that you can play with friends who own the game on Xbox or PlayStation or have purchased the game through the Windows store. All you need to do is add their friend code, and then you can join each other’s games.

​Is No Man’s Sky on Switch?

No Man’s Sky has been available on the Nintendo Switch since 7. October 2022, released in conjunction with version 4.0 of the game.

​What is No Man’s Sky? – A beginners’ guide for new explorers.

You play as The Traveller, and the game starts with you waking up on a remote planet.

Your character is suffering from amnesia, but you know that you must find your starship. It’s necessary to gather resources to get off the planet, but you’ll eventually do just that.

Later, you’ll learn more about who you are and your role as The Traveller, but you’ll need to play the title to unravel those mysteries.

Playing No Man’s Sky is an interesting experience where you’ll have to survive and explore different worlds. This game is mostly about exploration, but there are minor combat elements if you encounter hostile lifeforms.

It is a very satisfying experience to touch down on a planet and root around to find out what it’s like.

Since the game was updated, it has become a multiplayer experience, too. This means that you can now go exploring with friends.

If you’re looking for something even more immersive, you might want to check out what it’s like to play this game using a VR headset. You can switch between regular gameplay and VR gameplay seamlessly.

​What platforms are No Man’s Sky available for?

No Man’s Sky is available for: