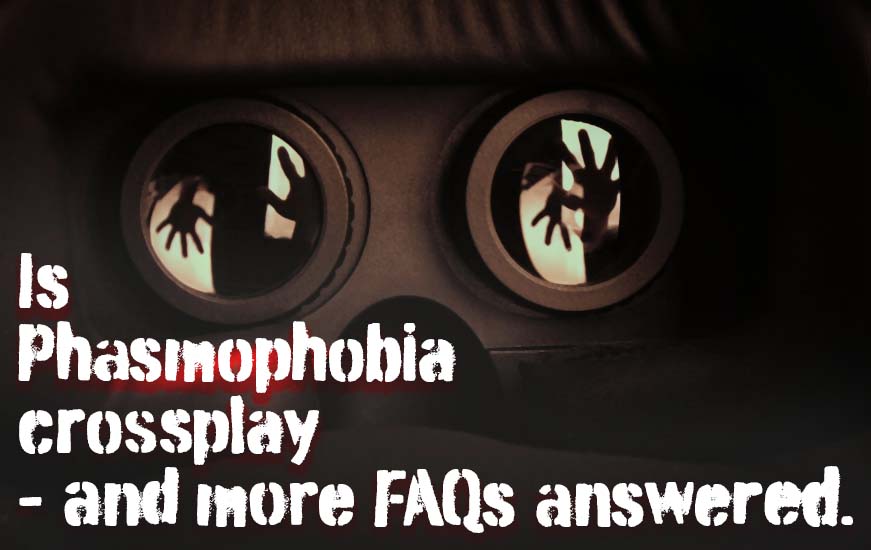 It entered early access in September 2020, and you can get the game on Steam for Windows PCs. Phasmophobia is notable for offering full VR support.

In this article, I’ll do my best to answer some frequently asked questions about this scary title, such as whether Phasmophobia is crossplay, whether it is coming to Xbox or PlayStation, and more.

So please put on your VR headset of choice, and let’s pay a visit to those that refuse to walk into the light.

See more on VR and crossplay for Rec Room.

What is Phasmophobia? – A quick overview.

Phasmophobia means fear of ghosts. It’s derived from the ancient Greek word Phasma meaning “phantom,” “apparition,” or “monster”, and phobia, which is a strong, irrational fear of something (fx a thing, animal, or situation). Phobia comes from the Greek word Phobos meaning “fear” or “horror.”

So it might be no surprise that you’ll unravel ghost mysteries in a video game called Phasmophobia.

Although there isn’t a standard story mode in Phasmophobia, you will be tasked with investigating hauntings occurring at various sites.

Each game you play can be a little story in some ways. Even so, there isn’t a complex narrative that will drive you forward in this title.

The gameplay in Phasmophobia involves you investigating hauntings from a first-person perspective. You’ll be able to examine things to determine what is going on.

The game uses speech recognition technology so equipment and even ghosts can understand what you’re saying through your headset.

The ghosts might react to key phrases or words, and you’ll need to consider your surroundings while completing objectives.

This title can be played solo but is also a multiplayer game. You can communicate with your fellow investigators through walkie-talkies, but they only work at certain distances.

This means that voice chat may or may not work depending on the distance between two players. Players can also play this title in VR if they want a truly immersive experience.

What platforms are Phasmophobia available For?

Phasmophobia is available for:

Is Phasmophobia on Xbox One or Xbox Series X|S?

Phasmophobia isn’t currently available on Xbox One or Xbox Series X|S. And there’s no indication in the Kinetic Games developer’s log that they are also working on bringing the game to Xbox.

So Phasmophobia isn’t available on Xbox Game Pass either, and I doubt it will be anytime soon – if ever.

Check out the best couch co-op games for Xbox.

Is Phasmophobia on PS4 or PS5?

No, Phasmophobia isn’t available on PS4 or PS5 at the time of writing. And there’s no indication in the Kinetic Games developers log that it’s either coming to PS4 or PS5.

Is Phasmophobia on Nintendo Switch?

No, Phasmophobia isn’t available on Nintendo Switch at the time of writing. And there’s no indication in the Kinetic games developers log, that it’s coming to Nintendo Switch either.

The game is VR-compatible, so it requires a lot of processing power. So if it were ever to come to Nintendo Switch, it would be a different version.

Also, since Kinetic Games is a small indie developer, I doubt they’ll have the capacity to port it to consoles. But who knows what the future might bring?

Well, you can crossplay Phasmophobia between VR and non-VR players. Also, since the game is available for PC, you can play together with friends on other builds than you using other VR headsets than yourself.

However, Phasmophobia isn’t cross-platform crossplay since it’s only available for PC.

Check out the best ring lights for streaming and gaming.

Can you play Phasmophobia without a VR headset?

Yes, you can play Phasmophobia without a VR headset. But if you want the full immersive haunting experience, a VR headset is a must.

But basically, this is good news since Virtual Reality headsets are still very expensive. Also, some people get motion sickness from VR headsets, so not everyone will adopt them. It also opens up the game to more players.

What VR headsets does Phasmophobia support?

Is Phasmophobia on Oculus Quest 2?

Yes, you can play Phasmophobia on Oculus Quest 2. However, since it’s on PC Steam only (and uses SteamVR as standard), you’ll need a Virtual Reality compatible PC plus either Link or Virtual Desktop.

Can you play Phasmophobia sitting down?

You can find a guide on the controls for playing the game, sitting down, and standing up in full VR mode here.

What is the Spirit Box in Phasmophobia?

The Phasmophobia ‘Spirit Box’ is a small handheld device that looks similar to a walkie-talkie. It generates white noise by cycling through frequencies within the radio wavelength spectrum. The ghosts use radio frequencies to communicate with players in the game.

You must be in the same room as the ghost or within 3 meters of it if it’s behind a wall. Also, the lights in the room must be off. If you come across a shy ghost, it will only respond if you’re the only person in the room.

Phasmophobia is one of the most interesting new takes on the horror video game genre I’ve seen in years.

And the fact that VR has matured enough to spawn such a title is great news – both for the future of VR and the horror genre since VR is basically ideal for horror games.