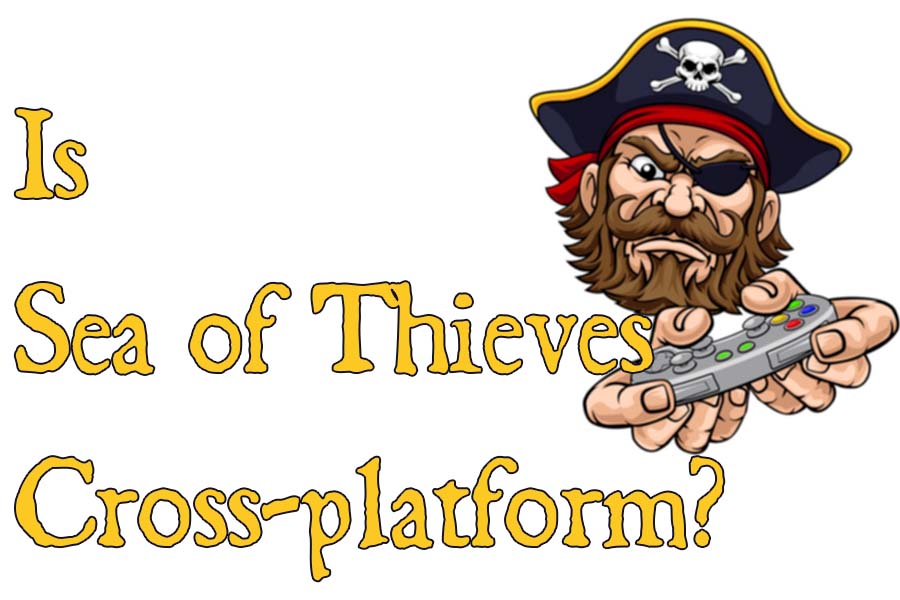 Sea of Thieves (aka SoT) is an online pirate adventure with great co-op gameplay. It’s available for Microsoft Windows, Xbox One, and Xbox Series X|S.

But is Sea of Thieves cross-platform?

Yes, Sea of Thieves is both cross-platform and cross-gen. If you’re on PC, you can play with friends on Xbox One and Xbox Series X|S and vice versa. However, if you want to crossplay with friends who bought the game on Steam, you must first link Steam up with an Xbox Live account.

Here are the answers to some other common questions about Sea of Thieves:

If I buy Sea of Thieves on Steam, do I also get it for Xbox and vice versa?

Unfortunately, you won’t get a copy of Sea of Thieves that you can also play on Xbox, you buy the game through Steam, and vice versa.

However, if you buy Sea of Thieves through Microsoft, you’ll get a copy that you can play on both PC and Xbox.

In other words, if you want to play SoT on both PC and Xbox (Play Anywhere Support), I recommend you buy the game through Microsoft Store.

Have you read how to share your game library on Steam with friends and family?

How to link Steam with Xbox Live

To link a copy of Sea of Thieves that you’ve purchased on Steam with Xbox Live, follow these easy steps:

How to play Sea of Thieves cross-platform between PC and Xbox?

If you’ve purchased your version of Sea of Thieves through Microsoft Store, you should already be able to see your friends on Xbox and PC from within the game lobby by pressing ‘Invite a friend.’

If you’ve purchased your version on Steam, you should already be able to invite your friends from within Steam.

If you want to crossplay Sea of Thieves between Steam and Xbox Live, players who’ve bought the game on Steam first need to link the game to an Xbox Live account (see above).

After this, players who’ve bought the game through Microsoft can invite friends from Steam and vice versa.

Does Sea of Thieves support cross-progression?

Is Sea of Thieves cross-platform on mobile?

Sea of Thieves isn’t available for mobile. If you see people running SoT on mobile, they stream the game from another device – fx using Chrome Remote Desktop on PC – to the mobile platform.

So, in essence, Sea of Thieves isn’t cross-platform between mobile and other platforms because it’s the PC that’s connected to the SoT servers. And you’ll experience a lot of lagging on the local network stream between the PC and your mobile device.

Is Sea of Thieves online only?

Yes, Sea of Thieves is online-only, i.e., you need to be online and connected to the SoT servers to play the game.

Is Sea of Thieves single-player?

While you can complete Sea of Thieves missions as a single-player, the game isn’t designed for this. SoT is a multiplayer game, and it’s much more fun to go privateering with friends.

Is Sea of Thieves on Game Pass?

Yes, Sea of Thieves is included in Game Pass.

Is Sea of Thieves free?

No, Sea of Thieves is not free. On Steam and Microsoft Store, you can purchase a game copy.

Sea of Thieves is also included in Game Pass on Xbox, which means it’s part of the package with a monthly subscription fee.

If you’ve bought Sea of Thieves on PC, you don’t have to pay a monthly subscription fee to play the game.

The game also has microtransactions called ‘Ancient Coins’ you can use for cosmetics such as skins. Thankfully, SoT isn’t pay-to-win.

What is Sea of Thieves? – A quick overview for new players.

Sea of Thieves is a pirate-themed action-adventure game played from a first-person perspective. SoT was developed by Rare and published by Microsoft on March 20, 2018.

It received an updated release on the Xbox Series consoles on November 10, 2020.

When Sea of Thieves first launched, it didn’t have a standard story mode. This is still mostly true since the game has been designed to encourage players to create their own stories.

You play SoT with friends online and captain a ship as you sail the seas in search of plunder. Players might encounter other groups of players who will become hostile and attempt to sink their ship, and you’ll be able to experience many shenanigans as you enjoy this title.

Playing Sea of Thieves involves coordinating with other players to captain a ship and sail the seas. You can find treasure maps and go out looking for buried treasure.

Eventually, you might need to fight off other players or AI-controlled threats. When you aren’t fighting for your life, it’ll be possible to drink grog on your ship and generally have fun with your friends.

This is a title that is designed to be fun for people online. If you have a group of friends to play with, this title will be much more enjoyable. You could also attempt to meet people inside Sea of Thieves and join pirate crews.

Did you know that you can hide your games from friends on Steam?

In December 2020, Rare moved to a “battle pass” model with seasons.

There is also a planned story content involving a partnership with Disney.

Sea of Thieves: A Pirate’s Life is an original story campaign that sees characters from Pirates of the Caribbean enter the world of Sea of Thieves. Players can spend time with Captain Jack Sparrow while experiencing a unique story campaign.

What platforms are Sea of Thieves available for?

Sea of Thieves is available for: