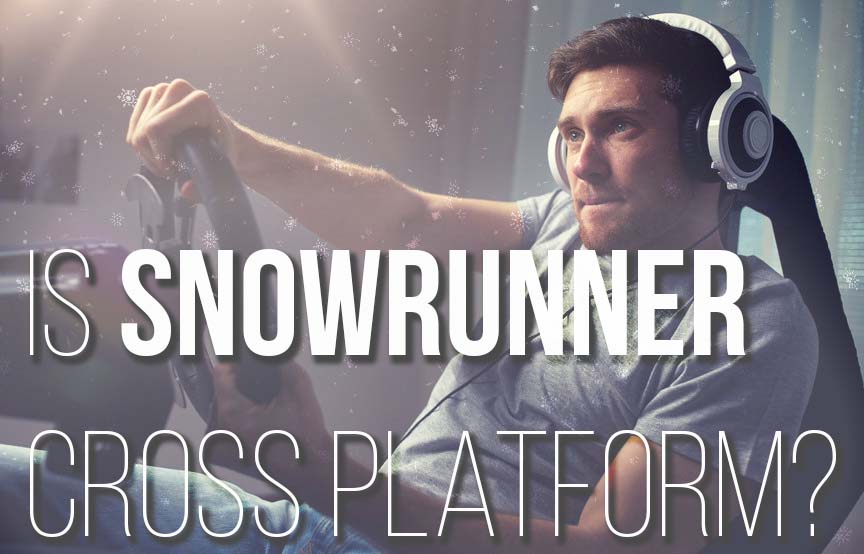 Snowrunner is an off-road simulation title developed by Saber Interactive and published by Focus Home Interactive.

It was released on April 28, 2020, for PC, and it also received console releases on Playstation 4 and Xbox One. The game was ported to the Nintendo Switch on May 18, 2021.

Snowrunner has received critical and commercial success due to its impressive visuals.

You can play Snowrunner as either single-player or multiplayer modes, though.

So that begs the question, is Snowrunner cross platform?

Yes, since Season 6, Snowrunner is cross-platform between PC, PlayStation, and Xbox, which means you can crossplay Snowrunner with friends on PS4 and PS5 and Xbox One and Xbox Series X/S if fx you’re on Windows and vice versa. Showrunner isn’t crossplay on Switch.

Into cars? Check out the fastest cars and bikes in GTA Online.

Put that 4WD in gear and see the answers to common questions about Snowrunner:

Yes, Snowrunner is cross-gen – though only through backward compatibility.

​Does Snowrunner have a photo mode?

Yes, since Season Six (available December 7, 2021), Snowrunner now has a photo mode, so you can take photos of your truck or 4×4 struggling to traverse the beautiful scenarios in the game.

You might also find this article on the open-world racing game The Crew 2 interesting.

​What is Snowrunner? – Here’s an introduction to new drivers.

Snowrunner has 40 different vehicles that you can control. You’ll also be able to explore 15 different sandbox locations that are based on real-world locations – such as Michigan.

Each sandbox location is like a small open-world environment where you can explore leisurely. You can use your vehicle to experience everything the different locations offer.

There are objectives you should pay attention to. For example, you’ll deliver cargo to different places on the map while traversing rough terrain.

There is also a damage system in this game where you’ll see physical damage on the car or the vehicle when something goes awry.

Also, check out check out Is Rocket League Cross Platform?

​What platforms are Snowrunner available for?

Snowrunner is available for: