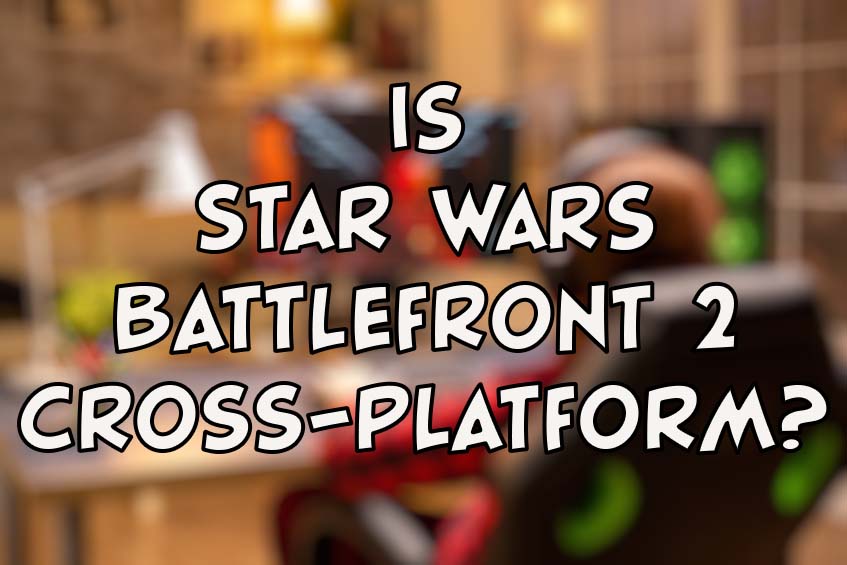 Battlefront 2 has both single-player modes and multiplayer modes. But multiplayer is basically what the game is designed for. But can you play together with friends on other platforms than you?

The short answer is that Star Wars Battlefront 2 isn’t cross-platform, i.e., it doesn’t support crossplay between PC, Xbox, or PlayStation. So if you own a PC, and your friends own an Xbox One or PS4, you can’t play SWBF2 together. The game allows for cross-gen play between Xbox One and Xbox Series X/S as well as PS4 and PS5.

Wrap your Jedi robe around you tightly, and get more answers below.

Again, that’s a big no. Star Wars Battlefront 2 doesn’t support cross-progression or cross-save between platforms. So if you migrate from fx PlayStation to Xbox, you have to unlock everything again.

Does Star Wars Battlefront 2 have split-screen?

Yes, Battlefront 2 does offer a couch-friendly 2-player split-screen option – but only on console.

Arcade mode allows you to play split-screen as either friend (co-op) or foe (versus mode). You can also play famous battle scenarios and relive some of your favorite movie scenes.

Unfortunately, the split-screen mode doesn’t allow you to play multi-player online with other players or play the single-player campaign as a co-op.

Battlefront 2 doesn’t support split-screen natively on PC. However, there is a mod that forces a local offline split-screen mode for two players on a PC.

What are the chances that Battlefront 2 will get cross-play in the future?

I’d say slim based on what I’ve read. EA has confirmed that they don’t have any plans for this in this forum thread.

What is Star Wars Battlefront 2. – A brief introduction.

Star Wars Battlefront 2 is a popular action-based shooter game developed by DICE. This shooter utilizes the legendary Star Wars license and allows players to recreate some of the most iconic battles in the franchise.

It features many of the most popular Star Wars characters and more obscure characters and references in the game. The game has both multiplayer and single-player modes for players to sink their teeth into.

In the single-player campaign, players will visit familiar locales in the Star Wars universe, such as Endor, Bespin, and Naboo. New planets to explore also make their first appearances in this title.

Players start the events of this game around the time the end of Return of the Jedi takes place in the Star Wars timeline. Some levels will have players controlling iconic Star Wars heroes such as Luke Skywalker.

The campaign covers a lot of ground by going from the time of the original trilogy up to the more recent movies.

The gameplay in SWBF2 is interesting because you get to switch from third-person and first-person perspectives. It has both a single-player and multiplayer mode.

Most players will spend more time with the multiplayer portion of this title. In the multiplayer modes, you’ll be playing as either the rebel alliance or the empire for the most part.

Battles are massive, and you’ll be just one soldier of many on either side of a conflict. Getting kills will score you points, and you can assist your team in various ways. T

here are different classes of soldiers that you can control that will be better at doing certain things. Some can use heavy weapons, while others can use better assault weapons.

There are also starfighter battles in this game. Players can take control of starfighters such as X-wings and Tie Fighters. The gameplay is varied and should keep you busy for quite some time.

After the initial release, EA released five free DLCs (called ‘Seasons’) for SWBF2. Each season features new maps, skins, and more, which ties in with the films. The five DLC Seasons are:

What platforms are Star Wars Battlefront 2 available for?

Battlefront 2 is available for: