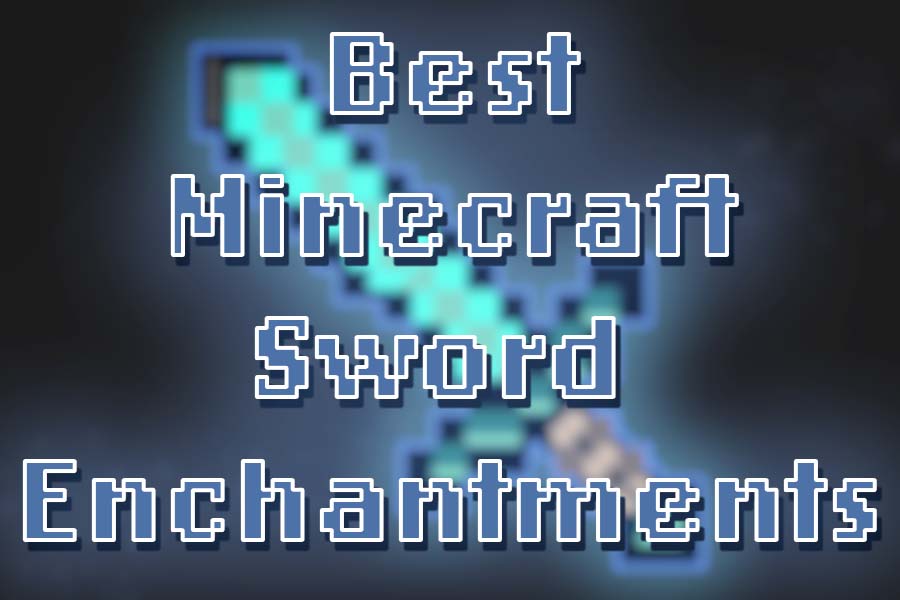 In this Best Sword Enchantments Minecraft Guide, I’ll guide you through the best sword enchants you can get.

Minecraft is a title that never gets old due to how much you can do in the game. You might be interested in the creative aspects of Minecraft, but sometimes it’s fun to go out adventuring, too.

When fighting monsters, you must have a decent sword that you can rely on. If you decide to take a trip to the nether, you’ll need a powerful sword to stand a chance.

You can make swords out of various materials that will be stronger depending on the rarity of the ore that you’re using. It’s also possible to make swords stronger by using special enchantments.

Below, you’ll be able to learn about the best sword enchants in Minecraft. I’ve ranked them from least useful to most useful as a top 10 list. All of them are going to help you in some way, though.

This Minecraft sword enchantments list will surely prove to be useful.

Check out the guide to amethyst in Minecraft.

The Bane of Arthropods enchantment helps you kill spiders and other arthropods much easier. If you’re incredibly afraid of spiders, even in video games, then this might be the enchantment for you.

It’ll give you peace of mind knowing that you’re capable of decimating any spider-like creatures near you. It’s also good at killing bees, silverfish, and endermites.

You’ll discover that the max level of this enchantment is five.

Since spiders aren’t that problematic in the game, it’s not the best sword enchantment overall. It can be useful for experience in farming purposes, though.

With this enchantment on, you can camp near a spider spawner and keep killing the fiends to watch your level rise.

Sweeping Edge helps your sweep attack to become much more useful in Minecraft. Sweep attacks will be more practical since they’ll deal much more damage.

It could give you the edge over other players or specific monsters in some ways. This enchantment is only available in Minecraft Java Edition and has a maximum level of three.

What does Smite do in Minecraft?

Smite is an overall very useful enchantment that helps you to kill undead mobs fast. Since you will encounter many zombies in this game, it’s good to have a sword that can deal with them quickly.

You’ll be able to use this enchantment to easily defeat zombies, wither skeletons, zombie horses, skeleton horses, withers, and more.

This is similar to the Bane of Arthropods enchantment in terms of utility since it has a max level of five.

So it’s great if you want to protect your base or the village you’ve settled in from the hordes.

Check out the guide on how to use the Minecraft Village Finder here.

Depending on how you play the game, this enchantment will either be extremely useful or pointless. If you play with trusted friends who wouldn’t do you any wrong, then you probably don’t need this enchantment.

This prevents greedy players from killing you and taking your cool sword. It’s an enchantment that has a max level of just one.

You might feel good to stick it to the person who tried to kill you by giving them nothing, but there are better enchantments.

Knockback can be great when you’re trying to fight off creepers. This sword enchantment makes it so that each hit with your sword knocks the enemy back quite a bit.

Putting some distance between yourself and a creeper can help you to survive when it explodes.

The enchantment has a max level of two, but it’s certainly one of the more useful enchantments when you’re exploring and don’t want to lose your stuff due to getting killed by a creeper.

Check out my guide to transport systems in Minecraft.

Fire Aspect allows you to set an enemy on fire with your sword. Who doesn’t love setting enemies ablaze with a blade of justice?

The enchantment has a max level of two, and it will also cook meat for you automatically. You could kill pigs and other animals with this sword enchantment active to make procuring food much simpler.

Mending is super helpful because it allows you to fix items up with XP orbs. You earn XP orbs from killing enemies, and they can heal items close to breaking.

So if your sword is getting close to being done, you can kill a monster with this enchantment and heal the sword. It extends the life of the sword and allows you to keep moving forward.

Using the Unbreaking enchantment allows you to wield a great durable sword. Your sword will last for a long time if you use this enchantment.

The max level for this one is three, and it makes a huge difference. Using this enchantment on your sword is a sensible choice if you like fighting a lot.

Looting is a special sword enchantment that makes it possible to get even more loot from killing enemy mobs.

If you’re trying to hunt down certain rare types of monster loot, you should use this enchantment.

It’ll make getting things such as wither skulls or ender pearls much easier. The max level for this enchantment is three, which you’ll want to use in many different situations.

It’s hard to argue that Sharpness is the best sword enchantment in Minecraft.

So what does Sharpness do in Minecraft? It simply increases the damage that you deal to enemies. This is simple, but it’s very useful to up the damage you do with each swing of the sword.

This enchantment has a max enchantment level of five. If you’re only going to bother with one or two enchantments, then this should be one of the options that you go for.

It makes your sword that much more useful. You’ll kill monsters faster while also being able to take out hostile players faster.

That’s the top 10 best sword enchantments in Minecraft, if you ask me.

The Sharpness is my favorite because it’s useful against various enemies. Plus, with a max enchantment level of five, you can power up and deal serious damage in survival.

Speaking of cool weapons, make sure also to check out my guide on how to find netherite in Minecraft the fast way.

Here are the answers to some frequently asked questions to sword enchantments in Minecraft:

How to enchant a sword in Minecraft?

How to enchant a sword with a book in Minecraft isn’t that hard if you follow these steps:

How to enchant a sword with sharpness 1000 Java Edition

If you want to get a really OP sword, you can enchant a sword with a sharpness of 1000 in the Java edition of Minecraft using commands.

In the Minecraft Java Edition creative mode, you can give an item any enchantment you want.

For the Java edition the syntax for enchanting an item is: /enchant <player name> <enchantment> [<level>]

However, that won’t work because the max level of sword enchantment is 5, and you’ll get an error.

Instead to a enchant a diamond sword with a sharpness of 1000 do this:

How to give your sword sharpness 1000 in Bedrock edition

So what about using commands in Minecraft Bedrock edition to give your sword sharpness 1000?

Unfortunately, using commands in Minecraft Bedrock edition is impossible to give your sword sharpness 1000.

So the only way to achieve this is using an external program (like Horion) to mod the game and inject the mod into the game. This is an exploit, so only use it on your game worlds.

How Many Enchantments Can a Sword Have?

A sword doesn’t have a limit on the number of enchantments that can be placed on it. It’s possible to have many different enchantments on one sword.

This means you don’t have to pick and choose if you don’t want to. Put all the enchantments on your sword if you’d like to make a powerful blade.

What Enchantments Can Be Put on a Trident?

Perhaps you’re a fancy person who prefers to use a trident to fight rather than a blade. Can you put enchantments on a trident? Yes, you can, indeed. However, there aren’t as many options.

Riptide is interesting because it allows you to deal splash damage with a trident that can help you to take down mobs faster.