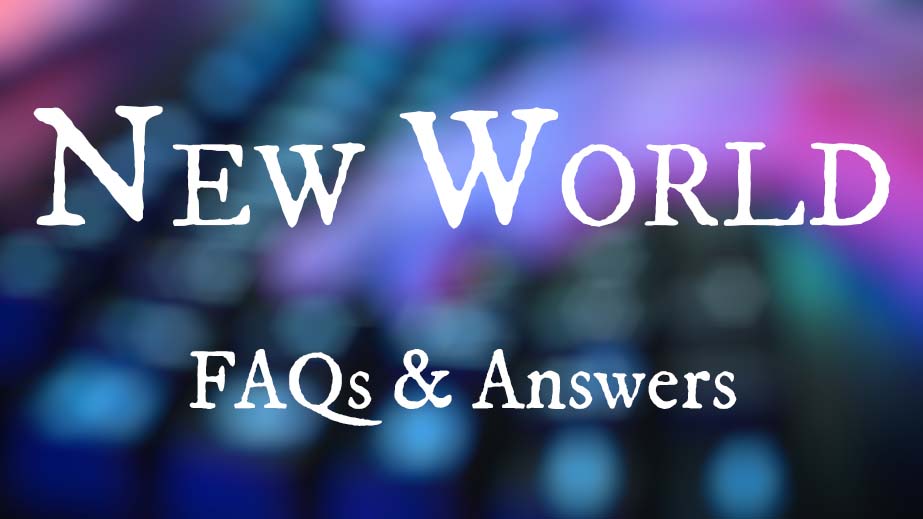 New World has been off to a rough start. The game’s success at launch seems to have even surprised Amazon.

The massive pressure on the servers resulted in players waiting for a chance to play the game for hours, and Amazon has been scrambling to allocate more resources.

Despite the rough start, New World is undoubtedly a massive success. And with great publicity comes many questions from new players that I’ll do my best to answer here.

But first, if you don’t know what New World is, here’s a quick introduction:

Check out this guide to the best MMO mouse for serious gamers.

What exactly is Amazon’s New World? A quick introduction.

The game was in development for quite some time, but it was finally released for the PC on September 28, 2021.

New World is Amazon’s first big foray into publishing large original video game titles. It doesn’t use a subscription-based play model like many MMORPGs since it has a buy-to-play philosophy.

Don’t like New World? Check out Path of Exile.

The story of New World is set in the 17th century. Players are colonizing land very similar to the Americas during the real historical period in which the game is set.

However, this version of the Americas is fictionalized. It’s technically set on the fictional island of Aeternum Island, which is located in the Atlantic Ocean.

Players jumping into New World will find that this MMORPG is a bit different from many of today’s most popular titles. It doesn’t feature an auto-lock feature, meaning players have to aim their attacks.

There are different weapon skill trees that you can focus on as you level up, such as sword/shield, bow, hatchet, hammer, musket, fire staff, life staff, and ice gauntlet. Players can level up personal attribute skills by playing as well as their weapons and trade skills.

You’re allowed to form groups of up to five people. Players can join one of three factions: marauders, syndicate, or covenant.

You can gain resources, craft items, go on quests, fight other players, fight monsters, and attempt to control settlements. The economy in this title is centered around gold coins you can earn.

It should also be noted that the game includes microtransactions. These come in the form of skins for your character. You can pay real-world money to obtain skins if you want to change how your character looks.

Is New World free to play?

No, New World isn’t free to play as you have to pay for the title, which is either a Standard Edition or Deluxe Edition. However, you don’t need to pay a monthly subscription or fee to play New World after you’ve purchased the game.

Read more about Warface, which is a free-to-play game.

Is New World Pay to Win?

No, thankfully, New World isn’t Pay to Win, which means players can’t buy items or experience to gain an advantage in the game. The micro-transactions in the game are purely cosmetic, i.e., new skins to change the appearance of the characters, weapons, or armor.

Is New World on Xbox?

No, unfortunately, New World isn’t available for Xbox. And there are no plans for a console version of New World shortly.

Is New World on PS4?

No, unfortunately, New World isn’t available for PS4 or PS5. And there are no plans for a console version of New World shortly.

Is New World on Mac?

No, unfortunately, New World isn’t officially available for Mac. And there are no plans for a Mac version of New World shortly. The only way to play New World on a Mac is to create a dual-boot with Boot Camp Assistant and install Microsoft Windows.

PvP means Player versus Player. You can choose to turn on New World PvP if you prefer or choose to play as PvE. But you’ll earn the biggest rewards by playing PvP.

The endgame Outpost Rush is PvP-based. In short, it’s up to you.

You can even level up and earn a faction reputation and currency by doing PvE missions for your faction. The endgame ‘Invasions’ is also PvE-based.

You can also play as PvP and turn it off if you prefer.

That being said, you’ll get the biggest rewards by playing PvP.

Can you play New World with a controller?

Officially, New World doesn’t support controllers. However, if you have an Xbox controller connected to Windows, you can easily re-bind the input controls in the game from your keyboard and mouse to work with the controller instead.

Does New World have dungeons?

Yes, New World does have dungeons for you loot hunters. However, in New World, dungeons are called ‘expeditions.’

Do you lose your stuff when you die in New World?

No, you don’t lose your items or experience points when you die in New World. However, items lose approximately 10 percent of durability when you die in PvE and 5 percent in PvP.