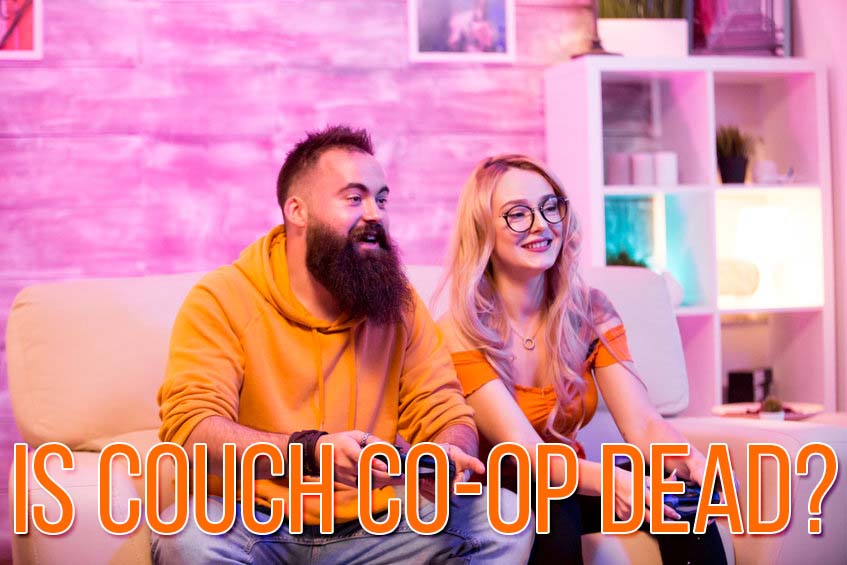 Many people fondly remember the days of sitting on their couches and playing games in the same room as their closest friends.

Playing video games together with friends who are in the same room as yourself is both a social and fun experience.

I’ve enjoyed playing video games with friends on the couch since the early days of playing on my Commodore 64 with two joysticks.

But now it seems as though there used to be many great couch co-op experiences, but these games aren’t as common these days.

What Is Couch Co-Op?

Couch co-op refers to being able to play multiplayer games cooperatively without the need to go online. Sometimes this involves playing the game as a split-screen – but not always.

If you want to play a game with a friend or family member while you’re both together, then having the option for couch co-op is very convenient.

This used to be a very common thing, but more and more games are only offering online play.

Why Are There No Co-Op Games?

The rise of online multiplayer has caused many game developers to focus on that instead of offering local multiplayer options. You’ll find that the vast majority of popular multiplayer titles are online games.

While this won’t come as a surprise to anyone who has been gaming for the last ten years, it’s the biggest reason why couch co-op isn’t as popular as it once was.

People are able to play games with their friends online, and you don’t necessarily have to invite someone over if you’re in the mood to play a co-op game.

No, couch co-op isn’t dead. There are still couch co-op games that you can purchase for modern consoles.

There are actually quite a few great examples of couch co-op games that you can look into.

You can also play games such as Streets of Rage 4, River City Girls, Moving Out, Overcooked, and It Takes Two right now. And It Takes Two actually won Game of the Year in 2021 at The Game Awards.

Check out my guide to the best couch co-op games for PS4 and PS5.

I also enjoy the LEGO video games together with my son. It’s also a great way to introduce him to Star Wars, Marvel, Jurassic Park/World, and DC comics – and all the other geeky stuff I love!

Regardless, it’s obvious that local co-op games aren’t as easy to find now.

This type of cooperative gaming experience might not be as ubiquitous as it was years ago, but it’s still around.

Check out my guide to the best couch co-op games for Xbox One and Xbox Series X|S.

There might also be some technical reasons why couch co-op isn’t seen in certain games.

The limited screen real estate might bother some, but getting local co-op to perform well takes time, and the game developers might not feel that it’s worthwhile to develop those modes these days.

Halo Infinite for the Xbox One and Series X|S consoles can serve as a good example. Traditionally, Halo games have offered co-op modes, but the game launched without the mode. You can only play the campaign in single-player mode.

It’s been said that this mode will be added in a later update, but so far it has not been a priority for 343 Industries. Instead, they’ve focused on getting the online multiplayer to perform well.

For gamers that appreciate couch co-op options, it’s a bit sad to see games abandon local co-op modes. There’s hope, though, since many studios are seeing that people still care about couch co-op.

The future of couch co-op games is still up in the air. If the trend continues, there will be even fewer of these titles being developed ten years from now.

Things could turn around and couch co-op could have a big revival. You’ll just have to keep playing and voting with your dollars as a consumer if you wish to see more.

Go Back to Old Titles

Supporting new couch co-op games will help if you want to see more of them get made. You should always seek out the best modern experiences when you’re looking for something new.

However, it’s important to remember that there are so many amazing couch co-op games from the past that you can turn to.

You can often find a good deal on a bundle on places like Steam. Recently I bought three LEGO Batman games for five bucks or so on there.

If you’re feeling nostalgic, then you can always go back to older games and play cooperatively with friends.

Xbox Game Pass has many older titles that offer local co-op modes. You could also play co-op games on retro consoles such as the SNES, Sega Genesis, and N64. All that really matters is that you’re having fun.

Whether you’re looking for something new or if you’re feeling nostalgic for great games of the past, you have options to consider.

Hopefully, you feel as though you have a better understanding of what is going on with couch co-op now. There are still good games out there to play, but you might have to dig a bit deeper than you used to.

It’s certainly worth the effort, though. You might just find some gems that will turn into favorites.